Who Me, Tea Partee?

In the wake of the passing of health care reform, bricks were thrown through windows, a gas line was cut, protesters spat on a Congressman Emanuel Cleaver, chanted “nigger” at Congressman John Lewis, and called Congressman Barney Frank a “faggot”. Faxes have been sent containing a drawing of a noose, and Congressman Russ Carnahan even woke up to find a coffin on his lawn.

In response, Republican lawmakers have tried to distance themselves from the violence, but have generally not condemned it. In fact, GOP Whip Eric Cantor even accused the Democrats of fanning the flames. He also claimed that his campaign office had been shot at (although that incident turns out likely to be unrelated). But the Republicans cannot play innocent. When one protestor made it into the public gallery of Congress and started screaming curses and insults, Republican lawmakers applauded him, even as the police tried to drag him out. 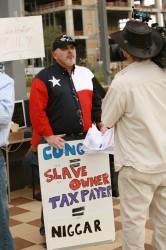 But in a moment that is either stunningly hypocritical or just an outright lie, the founder of teaparty.org, Dale Robertson, tried to deny everything and even blame it on the Democrats:

These people could be anybody. I wouldn’t put it past the Democrats to plant somebody there. “They’re trying to label the tea party, but I’ve never seen any racial slurs.

The only problem with his denial is a photo from a tea party protest in Houston showing Robertson holding a sign with the (misspelled) word “niggar” on it. Interestingly, Robertson was told to leave the event because of the sign.

The Republicans are doing a most dangerous dance, trying to keep the tea party base stirred up while at the same time appealing to the moderates that they will need to win elections. So they resort to code words and sly winks to the tea partiers. But as one writer aptly said about the tea party movement:

With their confusingly contradictory demands, their goon tactics, and their ability to organize and channel spluttering visceral fury, they are truly the loose cannon of American politics, endangering any conservative politician who doesn’t either ride with them or hide from them.

This was written by Iron Knee. Posted on Tuesday, March 30, 2010, at 10:29 am. Filed under Hypocrisy. Tagged Tea Party. Bookmark the permalink. Follow comments here with the RSS feed. Both comments and trackbacks are currently closed.