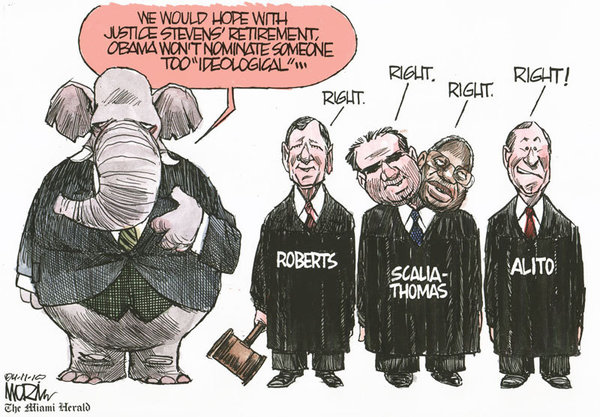 My favorite part of this comic is the two-headed justice. With the glasses, that makes for eight eyes. Who says justice is blind?

Isn’t it interesting that Justice Stevens is considered to be a liberal, even though he was nominated to the court by a Republican president?

UPDATE: The National Journal analyzed Justice Stevens and says that he started out as fairly conservative. They rank him the 12th most conservative nominee since the FDR era, and put him to the right of Reagan nominees Sandra Day O’Connor and Anthony Kennedy. Stevens himself says that he has remained true to his conservative values over the years, while the rest of the court moved far to the right.

This was written by Iron Knee. Posted on Tuesday, April 13, 2010, at 9:27 am. Filed under Humor. Tagged Supreme Court. Bookmark the permalink. Follow comments here with the RSS feed. Both comments and trackbacks are currently closed.