Sticking to their Guns 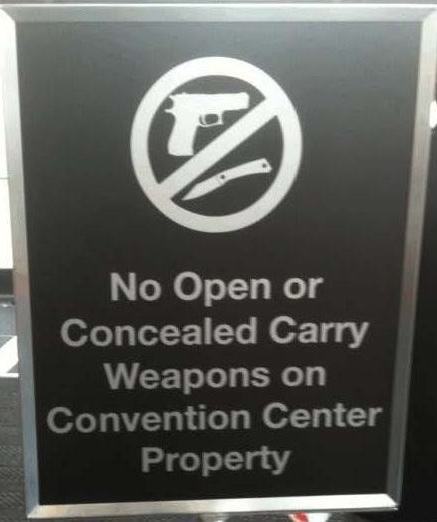 The National Rifle Association held their national convention in Charlotte, North Carolina recently. What’s somewhat ironic is that it is illegal to carry weapons (either open or concealed) in the convention center there. So the NRA is promoting the right to carry guns (almost) anywhere, but you can’t carry guns at their own convention. They are even using a metal detector to make sure people aren’t carrying guns.

But what I found very interesting is how reasonable the NRA members were about this ban. Progressive blog Think Progress sent a reporter to the convention and asked attendees how they felt about not being allowed to carry guns, and instead of being all “up in arms” about it, here are the responses they received:

TP: You don’t have a problem with not bringing firearms here?

NRA MEMBER1: Not really. It’s up to the individual place of business. It’s their right to do as they choose. It’s my right to choose not to come in if I choose not to do so.

NRA MEMBER2: I understand it. I think most people carry a gun for self defense. In a place like this, I’ve seen enough police presence around here I don’t think that there would be much of a problem.

NRA MEMBER3: Whether I truly agree with it or not, no I don’t, because again I say it’s an infringement on my rights. But I understand, like you said, they have to have a facility to hold this convention. This is a rule they have so we’re willing to abide by it.

The NRA itself points out that there are very few convention facilities in the country that allow firearms, so they are just being practical.

This was written by Iron Knee. Posted on Sunday, May 23, 2010, at 1:27 pm. Filed under Irony. Tagged Guns. Bookmark the permalink. Follow comments here with the RSS feed. Both comments and trackbacks are currently closed.