Why is it that racists always start sentences with “I am not a racist, but …”? Are they really in denial or are they just lying? And they almost always follow up with some comment about being “very good friends” with some member of the minority in question.

Arizona is making racist news again. This time, it is because of a mural painted at Miller Valley Elementary School in Prescott. The mural depicts actual students at the school, but the main figure just happens to be a hispanic child. The artists drawing the mural report that they were constantly bombarded by racial slurs from people driving by, such as “Get that spic off the wall”. The hatred kept up for two months while the mural was painted. Even more ironic is that some of these racists can’t even keep their minorities straight, calling the figure “nigger”. I guess minorities all look alike to some people. 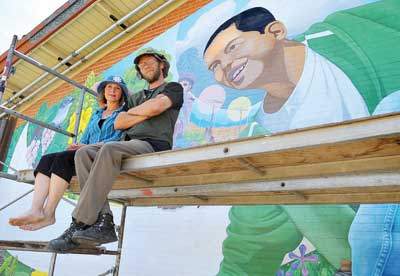 This was apparently all stirred up by city councilman and radio show host Steve Blair. In standard form, Blair said on his radio show:

I am not a racist individual, but I will tell you depicting a black guy in the middle of that mural, based upon who’s president of the United States today and based upon the history of this community when I grew up, we had four black families – who I have been very good friends with for years – to depict the biggest picture on that building as a black person, I would have to ask the question, “Why?”

My question is, “Why not?”. Apparently, Blair only wants to see white people on his murals. On another show:

But the fine people of Arizona have a solution to this problem. The school principal has asked the artists to rework the students’ faces in the mural, to make them lighter. Problem solved!

UPDATE: An editorial in the local paper makes some excellent points:

When I drive past the Miller Valley mural, I see a happy child. Not once did I consciously note what race was being depicted. When Councilman Steve Blair drives by, he sees the color black, while repeatedly claiming not to be racist. To paraphrase Shakespeare, “Methinks thou dost protest too much.”

Apparently, this is not the first time that Blair has gotten in trouble over racist comments, but this one was the last straw for the editors of the paper — they are now regretting endorsing him for City Council.

In addition, the local school board was one of those who refused to allow students to watch the video message from Obama last September.

UPDATE: Silver lining? The school district has cancelled their request to have the children’s faces lightened, and Steve Blair has apparently lost his radio show (although it remains to be seen what voters will do about his job on the city council). Blair remains unrepentant, saying that the mural is “defacing a public building, of a historic nature. … It looked like a guy, in my opinion, a black guy, brown guy holding a stick, and flowers and stuff, what was it supposed to mean? If they say it means going green, what does that mean?” I can tell him what it means, but I don’t think he would like the answer.

This was written by Iron Knee. Posted on Saturday, June 5, 2010, at 1:16 am. Filed under Irony. Tagged Immigration. Bookmark the permalink. Follow comments here with the RSS feed. Both comments and trackbacks are currently closed.