A few weeks ago I reported on “americaspeakingout.com” a new website created by the Republicans “to increase the dialogue between Americans and their Congress”. Of course, the Republicans aren’t paying for the site themselves, they are using “official funds of the Office of the House Minority Leader” (John Boehner).

Here, Americans are provided a new platform to share their priorities and ideas for a national policy agenda. As House Republicans, we are committed to our principles of limited, more accountable government; economic freedom; lower taxes; fiscal responsibility; protecting life, American values, and the Constitution; and providing for strong national security. This is an open forum, however, where all Americans are welcome to respectfully offer their opinions, regardless of party affiliation and whether we endorse them or not. It is our hope the active engagement of the American people will produce a robust debate that will aid in the construction of a new American agenda.

An open forum? At least one person is complaining that they were banned from the site, and saying that this is the comment that got them banned: 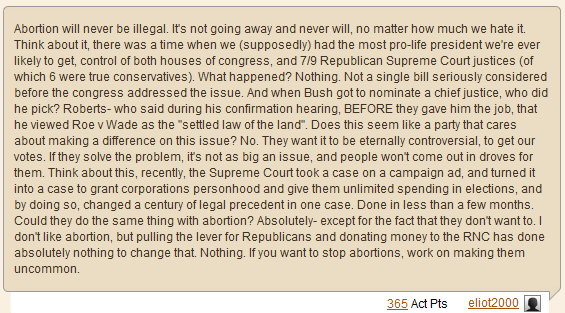 Not only is banning someone for a comment like this pretty hypocritically partisan and not very open, it makes you question if this site should be paid for by us taxpayers. But the comment itself also eloquently points out one of the biggest hypocrisies of the Republican party. While they pay lip service to social conservatives, Republicans get far too much benefit from continuing the culture wars, not only against abortion, but also against gay marriage, immigration, and many other issues.

Just this week, Indiana Governor Mitch Daniels got in hot water with social conservatives over his comments that the next president will have to call a truce in the culture war in order to focus on economic issues. Presidential candidate Mike Huckabee blasted Daniels for the comment, but tellingly then used it to try to raise money for his campaign:

Help me raise 2,012 new donations within the next 7 days for Huck PAC. That will help me show the importance of these issues to our Party and give us the financial resources we need to support strong conservatives who are fighting for life, traditional marriage, lower taxes, lower spending, secure borders and a strong national defense.

Help me send a strong signal – life and traditional marriage are NOT bargaining chips. Make a donation today.

I guess Republicans have figured out what defense contractors have known for a long time: war, even a culture war, makes money. Lots of money.

This was written by Iron Knee. Posted on Saturday, June 12, 2010, at 9:48 am. Filed under Hypocrisy. Tagged Republicans. Bookmark the permalink. Follow comments here with the RSS feed. Both comments and trackbacks are currently closed.