You Are What You Eat 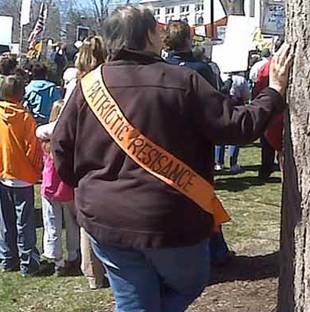 This site reported last week on yet another example of RAI — Republican Attendance Inflation — where a commissioned count of the attendees at Glenn Beck’s White Civil Rights Rally pegged the number at 87,000, but Glenn Beck himself declared the number to be 300,000 to 500,000 people (naturally, Michele Bachmann wins the “most inflated count” award, declaring “We’re not going to let anyone get away with saying there were less than a million here today – because we were witnesses.”)

But there’s a simple explanation. As the satirical site LOLGOP points out, there may have been only 87,000 people there, but they ate for 1,000,000.

The entire site is worth a read for a good giggle at the GOP’s expense. Also, here’s a link to more photos taken at Tea Party protests, showing off their “creative” spelling and grammar.

This was written by Iron Knee. Posted on Monday, September 6, 2010, at 9:50 am. Filed under Humor. Tagged Glenn Beck, Tea Party. Bookmark the permalink. Follow comments here with the RSS feed. Both comments and trackbacks are currently closed.