Invasion of the Body Scanners: why airport security will never work

I’ve been seeing a lot of frustration and anger at the new security measures going into effect in airports (especially from pilots). One issue is the new millimeter ‘backscatter’ x-ray machines. Previously, only your carryon bags were x-rayed, now they are x-raying your entire body. And since these new machines penetrate clothing, but stop at your skin, they show the TSA workers an image of you essentially naked.

If you don’t like the idea of being exposed to dangerous x-rays or being viewed naked, you can opt out, in which case you are given a thorough pat-down, including your genital areas. That goes for children too. Which would you prefer: Having your child subjected to dangerous radiation so they can be viewed naked by a stranger, or having their entire body including genitals felt up by a stranger?

But my real question is, what took everyone so long? I have never understood why people put up with airport security at all. Airport security has never made us any safer.

Airport security checkpoints were originally installed because of airplane hijackings (including quite a few to Cuba). But security never stopped a single hijacking. The main reason hijacking stopped was because we were able to get treaties signed with various countries (including Cuba) that guaranteed they would prosecute hijackers. So hijackers were arrested on landing and typically returned to the US to stand trial. Once that happened, the hijackings stopped, but curiously the checkpoints didn’t. (Interestingly, the other reason hijackings stopped was because we stopped giving so much media attention to them. Unfortunately, we haven’t yet learned the lesson that in order to cause terror, the terrorist wants publicity.) 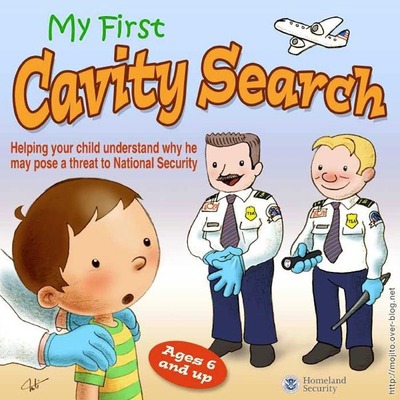 The problem is, in order for airport security to actually work, it has to be incredibly (almost impossibly) invasive. Even with the new x-ray machines any terrorist wannabe could smuggle weapons at least as dangerous as the ones used during 9/11 onto any airplane. Are we going allow the TSA to perform full body cavity searches of everyone who is going to board a plane? Seriously?

Because the only answer to “how much privacy and rights do you have to give up in order to ensure complete safety” is “every last one of them”. And even that isn’t good enough. In maximum security prisons where people have no rights and full cavity searches are done routinely, criminals manage to smuggle in weapons and other contraband. You think you can stop it at a busy airport?

Even if we could have complete and foolproof airport security (which we cannot), it would not make us any safer. In fact, it would likely make us less safe. Consider the x-ray machines. You might argue that the danger from x-rays is low, but so is the danger from terrorists. So low, in fact, the risk of dying from the x-ray machines is likely greater than the risk from being killed by a terrorist. So at best, we are getting rid of one risk (which we actually are not, since airport security is not foolproof) and substituting an even greater risk. How stupid is that?

And finally, even if we could have completely and foolproof airport security that had absolutely no risks, we would still not be any safer. Because airplanes are not the only place where we are in danger from terrorists. In fact, some people have argued that a terrorist could easily walk into an airport carrying a bomb and detonate it near a crowded airport security checkpoint. This would cause just as much terror, and shut down our air transportation system. And airport security couldn’t stop it.

As we well know, any place where large numbers of people gather could be a potential target for a terrorist bombing. For example, 9/11 killed around 3,000 people, but football stadiums hold tens of thousands of innocent people. There are many cruise ships that hold more people than were killed on 9/11, and those often operate in international waters where they cannot be protected. Even if we made airplanes (and airports) completely terrorist proof, the terrorists aren’t going to just give up. After all, the Oklahoma City bombing was carried out on an entire building, using a bomb hidden in a parked vehicle.

So what am I saying? That we shouldn’t do anything to prevent terrorism? Of course not. Installing reinforced cockpit doors on airplanes already took away the incentive for terrorists to try to pull something like 9/11 again. Not to mention the fact that passengers are now more willing to fight back against terrorists. A group of terrorists could perhaps blow up an airplane, but it would be much more difficult for them to use the airplane like a guided missile to destroy a large building.

What I’m saying is that the money being spent on airport security would be much better spent somewhere else, like investigating terrorists so we can stop them no matter if their plans target airplanes, government buildings, water supplies, or whatever. Even Forbes magazine says that we should abolish the TSA.

Isn’t this something we can all agree on? Right now, the only group benefiting from airport security are the companies who manufacture the x-ray machines, and the only winners in the war on terror are the terrorists, who would have us quaking in our boots, except we had to take those off in order to go through security.

UPDATE: Penn Jillette strikes back, in 2002.

UPDATE2: Someone worked out the math. Assuming that the TSA installs the new machines in every airport, then your chances of dying from a fatal cancer from one of these machines is 16 times more likely than your chance of dying onboard an airplane due to a terrorist attack. And in addition, the new machines do not detect PETN, the very explosive the underwear bomber was trying to use. However, the existing puffer machines do detect PETN. So why do we need the new expensive machines?

This was written by Iron Knee. Posted on Monday, November 15, 2010, at 5:21 pm. Filed under Irony. Bookmark the permalink. Follow comments here with the RSS feed. Both comments and trackbacks are currently closed.