How to balance the budget – real health care reform

Recently, the NY Times published a “deficit-reduction calculator” that is fun to play with, but its options for reducing government spending and raising revenue are simply too limited.

Ezra Klein gives some links to other similar calculators, but in case you want to skip to the ending, pretty much the only way to balance the budget without raising taxes is to hold down the growth of health care costs. Especially Medicare, which pays approximately half of our country’s health care bill.

In fact, if we paid per person for health care what any (including the most expensive) country with better health care outcomes pays, then we would have no budget deficit at all, we would have a budget surplus. We spend twice as much per capita as any other advanced country, and yet we have worse health outcomes and a lower life expectancy. And it is destroying our economy. 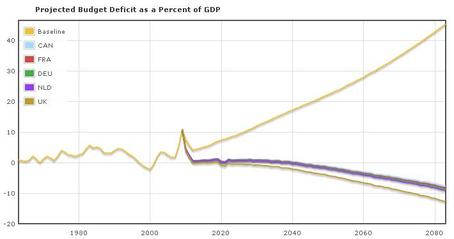 This was written by Iron Knee. Posted on Tuesday, November 16, 2010, at 1:12 am. Filed under Irony. Tagged Economy, Health. Bookmark the permalink. Follow comments here with the RSS feed. Both comments and trackbacks are currently closed.