[Richard Stallman, who started the free software movement, has an excellent editorial in The Guardian. It is also interesting that this was published in a British newspaper, not an American one. Stallman published it under the Creative Commons license that disallows derivative works, so I’m going to reprint the whole thing.]

The Anonymous WikiLeaks protests are a mass demo against control

The actions against MasterCard and Amazon are not ‘hacking’. People are just finding a way to protest in a digital space 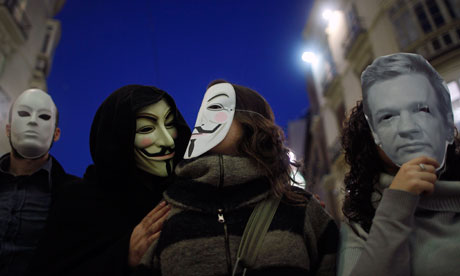 The Anonymous web protests over WikiLeaks are the internet equivalent of a mass demonstration. It’s a mistake to call them hacking (playful cleverness) or cracking (security breaking). The LOIC program that is being used by the group is prepackaged so no cleverness is needed to run it, and it does not break any computer’s security. The protesters have not tried to take control of Amazon’s website, or extract any data from MasterCard. They enter through the site’s front door, and it just can’t cope with the volume.

Calling these protests DDoS, or distributed denial of service, attacks is misleading, too. A DDoS attack is done with thousands of “zombie” computers. Typically, somebody breaks the security of those computers (often with a virus) and takes remote control of them, then rigs them up as a “botnet” to do in unison whatever he directs (in this case, to overload a server). The Anonymous protesters’ computers are not zombies; presumably they are being individually operated.

No – the proper comparison is with the crowds that descended last week on Topshop stores. They didn’t break into the stores or take any goods from them, but they sure caused a nuisance for the owner, Philip Green. I wouldn’t like it one bit if my store (supposing I had one) were the target of a large protest. Amazon and MasterCard don’t like it either, and their clients were probably annoyed. Those who hoped to buy at Topshop on the day of the protest may have been annoyed too.

The internet cannot function if websites are frequently blocked by crowds, just as a city cannot function if its streets are constantly full by protesters. But before you advocate a crackdown on internet protests, consider what they are protesting: on the internet, users have no rights. As the WikiLeaks case has demonstrated, what we do online, we do on sufferance.

In the physical world, we have the right to print and sell books. Anyone trying to stop us would need to go to court. That right is weak in the UK (consider superinjunctions), but at least it exists. However, to set up a website we need the co-operation of a domain name company, an ISP, and often a hosting company, any of which can be pressured to cut us off. In the US, no law explicitly establishes this precarity. Rather, it is embodied in contracts that we have allowed those companies to establish as normal. It is as if we all lived in rented rooms and landlords could evict anyone at a moment’s notice.

Reading, too, is done on sufferance. In the physical world, you can buy a book with cash, and you own it. You are free to give, lend or sell it to someone else. You are also free to keep it. However, in the virtual world, e-readers have digital handcuffs to stop you from giving, lending or selling a book, as well as licences forbidding that. Last year, Amazon used a back door in its e-reader to remotely delete thousands of copies of 1984, by George Orwell. The Ministry of Truth has been privatised.

In the physical world, we have the right to pay money and to receive money – even anonymously. On the internet, we can receive money only with the approval of organisations such as PayPal and MasterCard, and the “security state” tracks payments moment by moment. Punishment-on-accusation laws such as the Digital Economy Act extend this pattern of precarity to internet connectivity. What you do on your own computer is also controlled by others, with non-free software. Microsoft and Apple systems implement digital handcuffs – features specifically designed to restrict users. Continued use of a program or feature is precarious too: Apple put a back door in the iPhone to remotely delete installed applications and anotherin Windows enabled Microsoft to install software changes without asking permission.

The US state today is a nexus of power for corporate interests. Since it must pretend to serve the people, it fears the truth may leak. Hence its parallel campaigns against WikiLeaks: to crush it through the precarity of the internet and to formally limit freedom of the press.

States seek to imprison the Anonymous protesters rather than official torturers and murderers. The day when our governments prosecute war criminals and tell us the truth, internet crowd control may be our most pressing remaining problem. I will rejoice if I see that day.

This was written by Iron Knee. Posted on Friday, December 17, 2010, at 3:25 pm. Filed under Irony. Tagged Free Speech, WikiLeaks. Bookmark the permalink. Follow comments here with the RSS feed. Both comments and trackbacks are currently closed.