Daniel Kurtzman has a hilarious Glenn Beck Conspiracy Theory Generator over at his About.com political humor site. A lovely way to give yourself a giggle or two. Who needs the real Glenn Beck when a computer program can make just as much sense?

Here’s just one example, but there are plenty more where this came from: 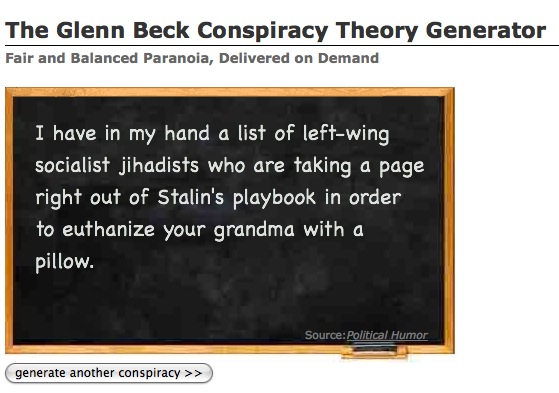 UPDATE: Someone put up a site that throws quotes at you, some from the Glenn Beck Conspiracy Theory Generator, and some from the real Glenn Beck. See if you can tell the difference!

This was written by Iron Knee. Posted on Tuesday, February 15, 2011, at 12:02 am. Filed under Humor. Tagged Fox News. Bookmark the permalink. Follow comments here with the RSS feed. Both comments and trackbacks are currently closed.