[reprinted from Political Relief. Thanks Chris!]

For a country that did something truly revolutionary 235 years ago and is rightfully proud of it, our reactions to the recent protests in the Arab world would leave all but the most cynical person scratching their heads.

Libya is the latest dictatorship whose people are rising in protest, and embattled dictator Moammar Ghadaffi has shut down the information pipes in an effort to avoid becoming the latest regime to topple.

Of course, America can take credit for the protests in this African country which borders Chad, Niger, and so on, for it wasn’t until a plucky U.S. president dared to send his own people to fight the people of Iraq that freedom ever crossed the minds of young Libyans. Granted that was 2,000 miles away and eight years ago. But since the G.O.P. changed its mind and decided that that war was about democracy rather than defense, it’s entitled to take credit for any uprising that emerges in any sandy country from that point forward. (And the Saudi uprising of 2022? Students in Riyadh will march under banners lovingly depicting the Crusader from Crawford.)

Unfortunately, the U.S. media no longer melt in the presence of Rumsfeld; their new crush is Facebook and Twitter. How conceited it was to think it was American force in Iraq that enabled democracy in Tunisia and Egypt — it was actually American entrepreneurs! We’ve been told for years now that i-Phones and You Tubes are nothing short of revolutionary, so who can blame us if we think that Twitbook and Facetube are as important as the courage to face down soldiers with machine guns? The impact of these technologies has been anecdotal and the protests thrived even after web and cell connections were cut, but inspiring stories of oppressed people putting their lives on the line for freedom is somehow less compelling unless we are somehow involved.

The protests have succeeded in Egypt and Tunisia, but history’s still underway in Libya. Ghadaffi seems as willing to slaughter his own people as a homeowner is to phone an exterminator, so thousands of lives are truly on the line. Given our Republican party’s eagerness to rid Iraq of its oppressive regime, you’d think they’d be demanding that President Obama initiate Operation Free Libya, or at least that he petition the U.N. to impose a no-fly zone so Ghadaffi can’t strafe his own people from the air. But distant crickets on a summer night are louder. (The Democrats aren’t much better, though Sen. John Kerry has made a start.)

And you’d think for all our American pride about freedom and for our leaders’ flowery speeches citing foreign peoples looking to the U.S.A. for inspiration and encouragement against tyrannical regimes, that we’d demand our leaders do everything possible to support the Libyan revolution, perhaps seeing the same glimmers of independence that we think of so fondly when we quote our own founding fathers and revolutionaries.

But after the latest estimated death toll (likely over 1,000) or wacky pronouncement from Ghadaffi (al-Qaeda is “putting drugs in protesters’ milk and coffee“), the analysis soon turns to what really concerns us (or rather, our own regime): the price of oil (Libyan output down 75%). 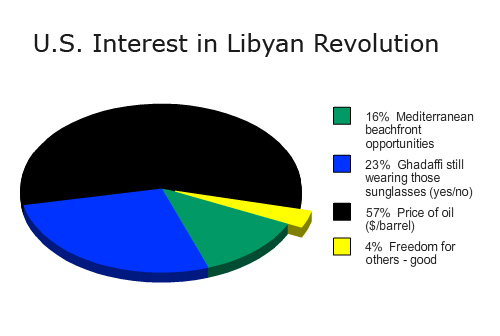 This was written by Iron Knee. Posted on Thursday, February 24, 2011, at 2:20 pm. Filed under Hypocrisy. Tagged Democracy, Middle East. Bookmark the permalink. Follow comments here with the RSS feed. Both comments and trackbacks are currently closed.