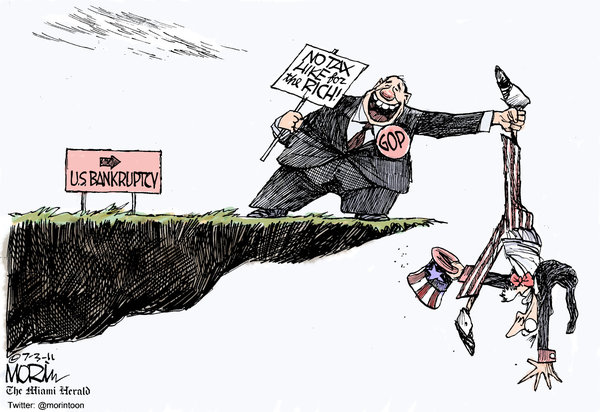 © Jim Morin
The Republicans say that raising taxes is not allowed. Nancy Pelosi has declared that Democrats will not support cuts to Medicare or Social Security benefits. So who is going to blink first?

Warren Buffett has one solution: “I could end the deficit in 5 minutes. You just pass a law that says that anytime there is a deficit of more than 3% of GDP all sitting members of congress are ineligible for reelection.”

If you liked this, you might also like these related posts:
This was written by Iron Knee. Posted on Friday, July 8, 2011, at 2:13 pm. Filed under Irony. Tagged Deficits, Taxes. Bookmark the permalink. Follow comments here with the RSS feed. Both comments and trackbacks are currently closed.