The Deficit You’re Freaking Out About Was Caused by Bush 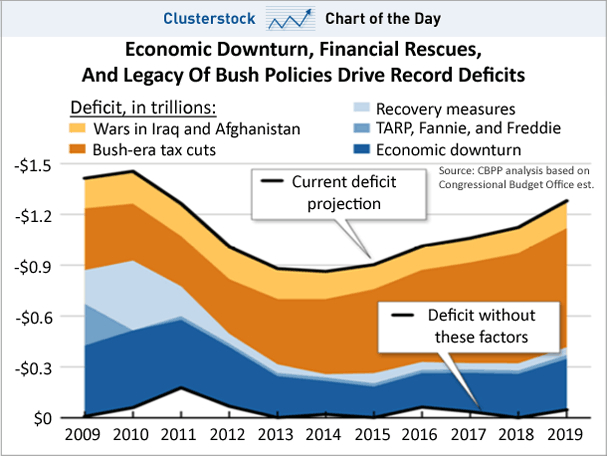 I’m getting tired of the Republicans pretending that they are serious about deficit reduction and blaming it on Obama. They keep claiming that Obama raised the deficit more than Bush, but that was only to fund the stimulus to clean up the economic mess left by Bush. And the stimulus spending has now mostly gone away. Even now, the deficit is clearly going down, with the major cause of the continuing deficits being Bush’s tax cuts, which the Republicans refuse to get rid of.

If Bush hadn’t screwed up everything, the deficit would be the black line at the bottom of the graph. The only reason Republicans are screaming about the deficit now is so they can kill virtually every single program that helps people who tend to vote Democratic.

This was written by Iron Knee. Posted on Monday, July 11, 2011, at 10:38 pm. Filed under Hypocrisy. Tagged Deficits. Bookmark the permalink. Follow comments here with the RSS feed. Both comments and trackbacks are currently closed.