The Truth About Economic Growth

Business Insider put together an interesting chart showing GDP minus government spending. In other words, it shows economic growth coming from the private sector (not from stimulus spending): 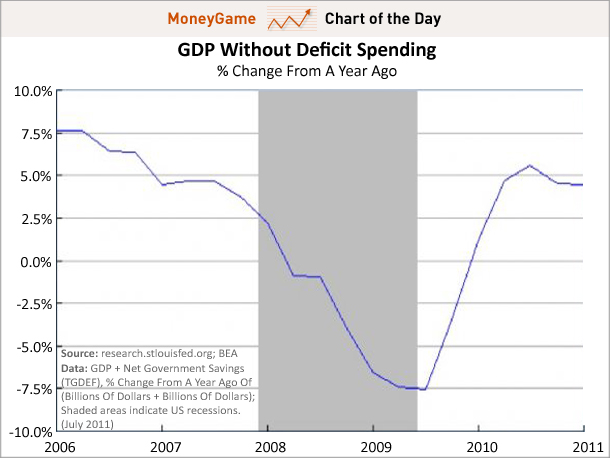 The shaded part is the recession, where by early 2009 (when Obama took office) the economy was shrinking by 7.5%. But less than a year later, the (private sector) economy was growing again by 5%, which is not bad.

The problem is that as stimulus spending stops, those jobs go away, and the private sector is not creating enough jobs to replace them. It is pretty clear that the stimulus did its part of the job — stimulating the economy to get it going again, but unless the private sector does its part and starts hiring again we could risk a renewed recession, especially since the Republicans are trying to drastically cut government spending even more.

It is frustrating that the Republicans claim to be so concerned about deficits now, even though during the Bush administration they had no problems voting for unfunded entitlement programs like Medicare Part D, and starting two wars while simultaneously cutting taxes for the rich. I can’t think of an explanation for their behavior other than they want the economy to suffer.

This was written by Iron Knee. Posted on Wednesday, July 20, 2011, at 10:01 pm. Filed under Irony. Tagged Deficits, Economy. Bookmark the permalink. Follow comments here with the RSS feed. Both comments and trackbacks are currently closed.