Just what we need … another Texas governor as president? 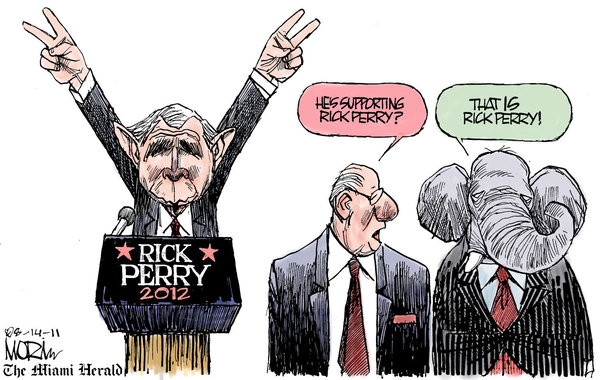 Of course, there are differences between Bush and Perry. For example, Bush mostly pretended to be a fundamentalist Christian, while Perry is a full tilt Dominionist, who believes that Christians have a God-mandated right and duty to rule all earthly institutions according to God’s law.

UPDATE: Jon Stewart on Rick Perry (including the resemblance to Dubya). Hilarious.

UPDATE 2: The Cristian Science Monitor has an enlightening article about an upcoming book about Rick Perry entitled “Adios Mofo: Why Rick Perry Will Make America Miss George W. Bush“. The book describes Perry as an “ideologue with scant interest or success in governing”.

This was written by Iron Knee. Posted on Tuesday, August 16, 2011, at 1:24 am. Filed under Irony. Tagged Religion. Bookmark the permalink. Follow comments here with the RSS feed. Both comments and trackbacks are currently closed.