[by Andy Borowitz of The Borowitz Report] 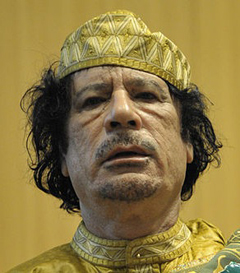 CONCORD, NH (The Borowitz Report) – The mystery surrounding Col. Muammar Gaddafi’s whereabouts was resolved today as the dictator announced his candidacy for the Republican presidential nomination in a town hall meeting in Concord, New Hampshire.

In announcing his candidacy, the Libyan madman joins a Republican field which is believed to number in excess of seven hundred candidates.

While some New Hampshire Republicans seemed surprised to see Col. Gaddafi shaking hands and kissing babies at the Concord town hall, an aide to the Libyan strongman said his transformation to GOP candidate made perfect sense.

“In those final days in Tripoli he was becoming increasingly disconnected from reality,” said the aide. “So I think he’ll fit right in.”

Mr. Gaddafi, dressed in his trademark yellow turban and matching robe, got mixed reviews in his first appearance on the campaign trail, with some New Hampshire citizens saying that his six-hour stump speech was badly in need of pruning.

Additionally, some felt that his rhetoric needed to be toned down, especially his closing line about fighting for the Republican nomination “until the last drop of blood.”

But others gave him high marks for his grasp of history and geography, which most agreed was stronger than Michele Bachmann’s.

Perhaps underscoring the challenges that lie ahead for Mr. Gaddafi in his quest for the GOP nod, current polls show him in the back of the pack, leading former Senator Rick Santorum but trailing the pizza guy.

“Unfortunately for Muammar Gaddafi, he might be out of step with the current crop of Republican candidates,” one pollster said. “There’s a perception that he’s too moderate.”

This was written by Iron Knee. Posted on Saturday, September 3, 2011, at 7:29 pm. Filed under Humor. Tagged Elections, Terrorists. Bookmark the permalink. Follow comments here with the RSS feed. Both comments and trackbacks are currently closed.