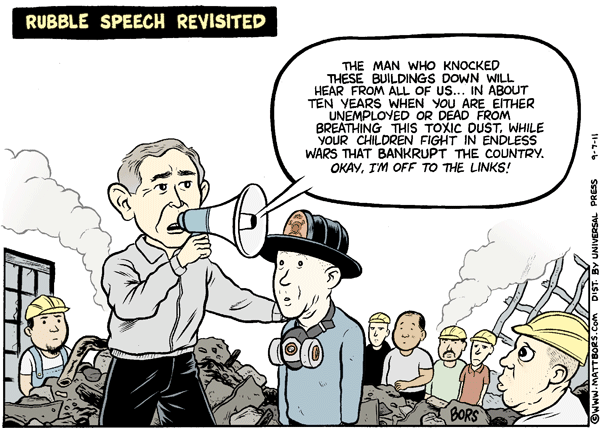 Is it just me, or are the 9/11 commemorations oddly subdued?

Actually, I don’t think it’s me, and it’s not really that odd.

What happened after 9/11 — and I think even people on the right know this, whether they admit it or not — was deeply shameful. Te atrocity should have been a unifying event, but instead it became a wedge issue. Fake heroes like Bernie Kerik, Rudy Giuliani, and, yes, George W. Bush raced to cash in on the horror. And then the attack was used to justify an unrelated war the neocons wanted to fight, for all the wrong reasons.

A lot of other people behaved badly. How many of our professional pundits — people who should have understood very well what was happening — took the easy way out, turning a blind eye to the corruption and lending their support to the hijacking of the atrocity?

The memory of 9/11 has been irrevocably poisoned; it has become an occasion for shame. And in its heart, the nation knows it.

This was written by Iron Knee. Posted on Sunday, September 11, 2011, at 12:53 am. Filed under Irony. Tagged Bush, Terrorism. Bookmark the permalink. Follow comments here with the RSS feed. Both comments and trackbacks are currently closed.