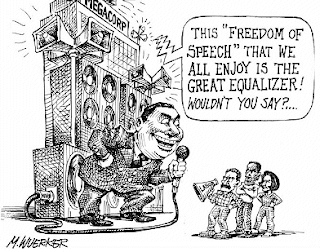 Scott Turow says it well in a Bloomberg post:

The bedrock of our democracy is embodied in the most famous line of the Declaration of Independence, “All men are created equal.” Our belief in the equal dignity and value of every human being has led to the fundamental precept of one person, one vote — a tangible recognition that each citizen deserves an equal say in who governs her or him.

By treating money as an analog for speech, the court’s post-Buckley jurisprudence has figuratively allowed the rich to speak through microphones while the poor can barely whisper, and tolerates a situation in which the voices of contributors are amplified to the point that they drown out the opinions of mere voters. I have never understood how permitting the wealthy so much greater influence over the political process can be squared with the vision of equality on which the country was founded.

I think it’s important to keep in mind that money isn’t the problem in politics, it’s how much and where it comes from. If a candidate can raise a million in $10 donations from 100,000 individuals then more power to him. If a Donald Trump creates a PAC and funds it with a million dollars to attack one candidate, then more power to Trump. Freedom of speech just isn’t the same if no one can hear you over the din from the well funded speakers.
– Iron Filing

This was written by Iron Filing. Posted on Wednesday, December 7, 2011, at 7:25 am. Filed under Irony. Tagged Freedom of Speech. Bookmark the permalink. Follow comments here with the RSS feed. Both comments and trackbacks are currently closed.