A reader has asked an interesting question — what would be the result if libertarian Ron Paul were elected President. This is not a hypothetical question — some poll show him leading in Iowa. Whether you’re a fan of Paul or not, if you can imagine a scenario that is likely to happen if we had a libertarian president, please share it with the rest of us in the comments. You know, scenarios based on us going back on the Gold Standard, legalizing drugs, making abortion illegal, etc. Humor is encouraged, but to be truly funny they must have an element of truth.

If you aren’t sure of Ron Paul’s positions on various issues, here’s a few sources: Official Campaign website, Wikipedia page, RonPaul.com, Daily Paul, and Who is Ron Paul. 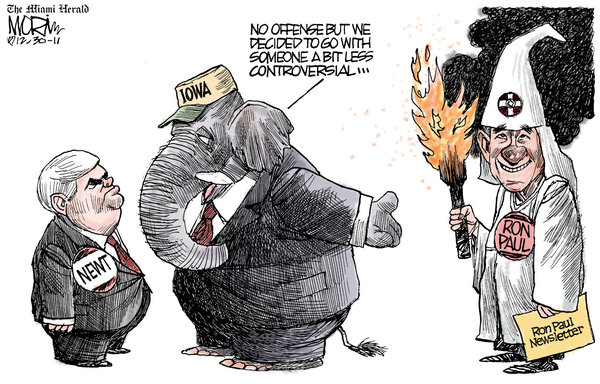 This was written by Iron Knee. Posted on Saturday, December 31, 2011, at 1:37 am. Filed under Irony. Tagged Elections. Bookmark the permalink. Follow comments here with the RSS feed. Both comments and trackbacks are currently closed.