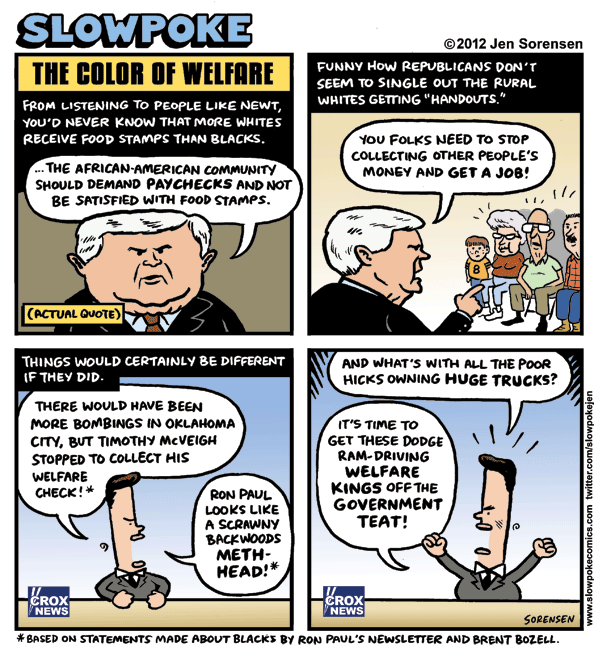 For example, when asked a question about welfare 2 days before the Iowa caucuses, Rick Santorum replied “I don’t want to make Black people’s lives better by giving them somebody else’s money; I want to give them the opportunity to go out and earn the money.” The problem is that the question didn’t mention blacks at all, and statistically far more whites receive low-income assistance than blacks. But somehow the word “welfare” has become coded as referring to blacks.

In addition to the quote in the comic, Newt Gingrich called Obama “the most successful food stamp president in American history.” I’m not even sure what that’s supposed to mean, but it sure sounds like someone tossing out red meat to the base.

UPDATE: Here’s some commentary from Jen Sorensen on her comic:

You’d think that decades in politics would knock the racist claptrap out of someone like Newt Gingrich, but, well, this is the GOP we’re talking about. Instead, he just substitutes polite-sounding phrases like “African-American community” and “demand paychecks” for “those lazy blacks.” How does one go about demanding a paycheck, anyway? I’d like to be able to do that, and have one show up. That would be cool.

The dialogue in the third panel refers to Ron Paul’s Paranoid Kook Reports, which contained the theory that the LA riots only came to a halt because everyone went to pick up welfare checks. And right-wing noise machine poopshoveler Brent Bozell said on Fox News that Obama looked like a “skinny ghetto crackhead.” Rick Santorum has also made similar comments to Newt’s.

For data on food stamp usage, I looked at this USDA report (big PDF, via the ThinkProgress article linked above; page 75 has the breakdown) and this, which documents disproportionate rural usage, largely by children.

This was written by Iron Knee. Posted on Thursday, January 12, 2012, at 2:49 am. Filed under Irony. Tagged Race. Bookmark the permalink. Follow comments here with the RSS feed. Both comments and trackbacks are currently closed.