Dogged By His Past Comments 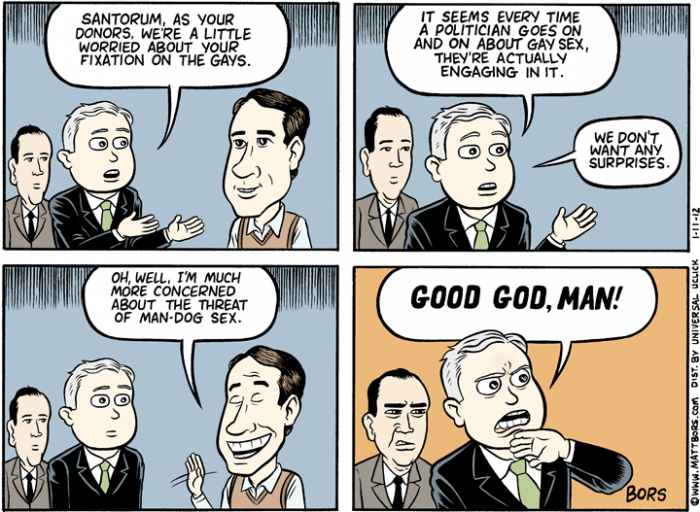 In 2003, Rick Santorum warned that the Supreme Court using the right to privacy to strike down laws against having gay sex in your own home would essentially mean you also have the right to bigamy, polygamy, and incest. I actually have some sympathy for this viewpoint (even though I don’t agree with it), since if you allow the government to make bigamy, polygamy, and incest illegal then you are saying that the government does have the right to regulate some aspects of marriage, sex and sexuality. But then he took it a step too far:

In every society, the definition of marriage has not ever to my knowledge included homosexuality. That’s not to pick on homosexuality. It’s not, you know, man on child, man on dog, or whatever the case may be. It is one thing.

While it may be a stretch to say that Santorum is more concerned about man-dog sex than with homosexual sex, he did indeed compare homosexuality to man on dog sex.

What makes this hypocritical is that Santorum is now denying that he ever connected homosexuality to bestiality.

The original interview from 2003 is definitely worth a read. That’s the one where he also claimed that the Catholic Church scandal involved “priests who were having sexual relations with post-pubescent men. We’re not talking about priests with 3-year-olds, or 5-year-olds. We’re talking about a basic homosexual relationship. Which, again, according to the world view sense is a a perfectly fine relationship as long as it’s consensual between people.” Santorum’s not only equates homosexuality with sexual abuse by priests, it is a bald-faced lie. Even the Catholic Church has documented that more than 70% of the sexual abuse victims were children who were either pre-pubescent or right at the age of puberty, not post-pubescent.

It is also interesting that the interviewer in 2003 had a similar reaction of revulsion to Santorum’s man-dog statement as the people in the fourth panel of this comic:

I’m sorry, I didn’t think I was going to talk about “man on dog” with a United States senator, it’s sort of freaking me out. … Sorry, I just never expected to talk about that when I came over here to interview you.

This was written by Iron Knee. Posted on Saturday, January 14, 2012, at 12:47 am. Filed under Hypocrisy. Tagged Gays. Bookmark the permalink. Follow comments here with the RSS feed. Both comments and trackbacks are currently closed.