How Gingrich Won in SC 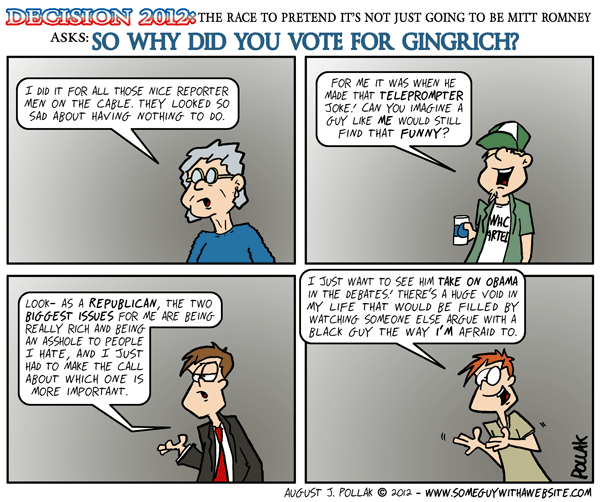 I had an interesting conversation the other day with someone who is fairly conservative. We were both trying to figure out how Republicans in South Carolina could have voted for Newt Gingrich, someone who is a serial philanderer, lobbyist, Washington insider, ethically challenged, and can’t even run a presidential campaign without pissing off his own campaign staff. Plus he seems to not have any actual ideas or plans he is promoting. And he seems to be unable to stop lying about things that are public record, like his $300,000 fine for ethics violations.

Regardless, the Obama campaign must be enjoying watching the Republican candidates trash and burn each other.

If you liked this, you might also like these related posts:
This was written by Iron Knee. Posted on Monday, January 23, 2012, at 9:33 am. Filed under Irony. Tagged Elections. Bookmark the permalink. Follow comments here with the RSS feed. Both comments and trackbacks are currently closed.