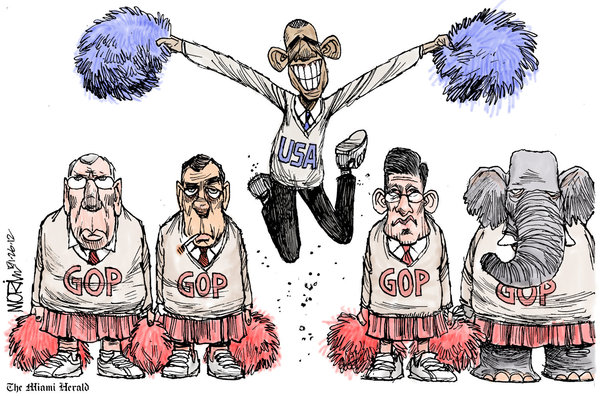 In the last quarter of 2011, the economy grew at an annual rate of 2.8% (up from 1.8% in the prior quarter), and much of this growth was fueled by growth in the sales of automobiles and other durable goods. Over 3 million private-sector jobs have been created in the last 22 months. And he gave a very good, upbeat but challenging State of the Union address.

I guess the only thing for the Republicans to do is to try to convince you that things are worse now than the last time they held the presidency. Good luck with that.

UPDATE: The New Yorker magazine has a long, but rewarding article about Obama, based on hundreds of pages of internal White House memos. It is an interesting and insightful look at how our government works (or doesn’t work), the challenges that face any president, and how Obama has responded to those challenges. A few quotes:

Obama made important mistakes in the first half of his term. He underestimated the severity of the recession and therefore the scale of the response it required, and he clung too long to his vision of post-partisanship, even in the face of a radicalized opposition whose stated goal was his defeat.

He is frustrated with the irrational side of Washington, but he also leans on the wisdom of his political advisers when they make a strong case that a good policy is bad politics. The private Obama is close to what many people suspect: a President trying to pass his agenda while remaining popular enough to win re-election.

Obama didn’t remake Washington. But his first two years stand as one of the most successful legislative periods in modern history. Among other achievements, he has saved the economy from depression, passed universal health care, and reformed Wall Street. Along the way, Obama may have changed his mind about his 2008 critique of Hillary Clinton. “Working the system, not changing it” and being “consumed with beating” Republicans “rather than unifying the country and building consensus to get things done” do not seem like such bad strategies for success after all.

This was written by Iron Knee. Posted on Friday, January 27, 2012, at 7:42 pm. Filed under Humor. Tagged Elections. Bookmark the permalink. Follow comments here with the RSS feed. Both comments and trackbacks are currently closed.