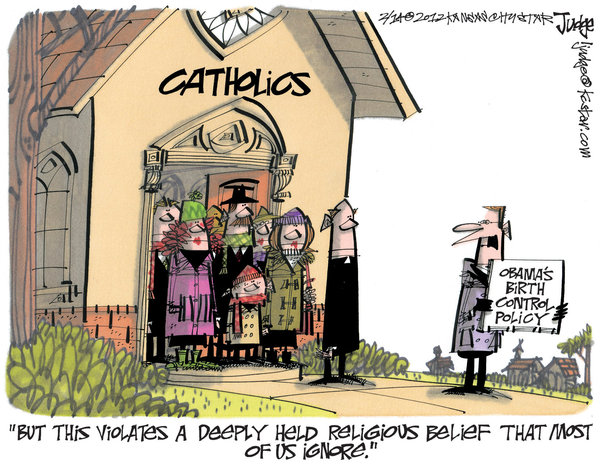 At the recently held Conservative Political Action Conference (CPAC) a panel session discussed that the fight against birth control wasn’t working. As this comic points out, how can the Catholics call birth control a deeply held religious belief when not only have 97% of Catholic women used birth control, but a majority of Catholics say it should be covered by insurance policies.

So what solution did the CPAC panel have for this problem? Simple! Reframe the debate. Stop calling it “birth control” and start calling it an “abortion mandate”. Of course, there is no abortion mandate, but reality doesn’t matter. As the president of Americans United for Life put it:

As an organization we’re going to be more disciplined about talking about the abortion mandate coming from HHS and I would encourage you all to do the same.

How in the world are they going to reframe this issue? Again simple, according to Right-To-Life president Carol Tobias:

I truly believe the mandate from HHS was a deliberate attempt by the Obama administration to get a discussion in this country right before the election over whether men controlling the Catholic church can tell women whether or not to take birth control. That’s the debate they want. We need to bring it back. This is religious freedom. If they can tell the Catholic Church that they have to provide contraception to their employees, then they can also tell National Right to Life that we have to provide abortions for our employees.

I guess their philosophy is “When in doubt, lie” and “If you’re going to lie, make it a really big lie“. You know, by calling it an “abortion mandate”.

This was written by Iron Knee. Posted on Friday, February 17, 2012, at 8:38 am. Filed under Hypocrisy. Tagged Abortion, Conservatives, Health. Bookmark the permalink. Follow comments here with the RSS feed. Both comments and trackbacks are currently closed.