What’s All This I Hear About Youth In Asia?

Earlier this month, presidential candidate Rick Santorum went into a church and publicly lied through his teeth. This wasn’t some momentary hyperbole during a campaign speech, or while arguing with another candidate. The event was a forum at the Grace Bible Church moderated by Dr. James Dobson, the founder of the conservative group Focus on the Family (who has endorsed Santorum).

I had heard about this, but until I saw the video I didn’t realize how calmly and deliberately he had lied:

Needless to say, the Dutch are pretty upset about this, one article saying that Santorum’s comments “would be a laughing matter, if he weren’t in the race for the Republican nomination to take on Barack Obama in the race for the presidency of the most powerful country in the world.”

Santorum has so far refused to clarify his statements, but instead is doubling down by attacking education. After all, who needs facts when a crazy lie will do just as well? 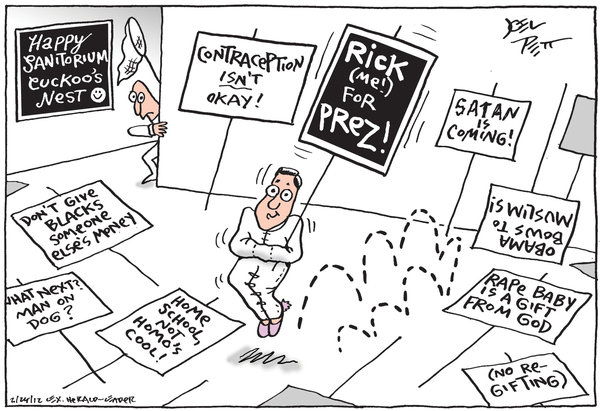 This was written by Iron Knee. Posted on Sunday, February 26, 2012, at 7:06 am. Filed under Hypocrisy. Tagged Conservatives, Elections. Bookmark the permalink. Follow comments here with the RSS feed. Both comments and trackbacks are currently closed.