Is Romney the Perfect Candidate for the Republicans? 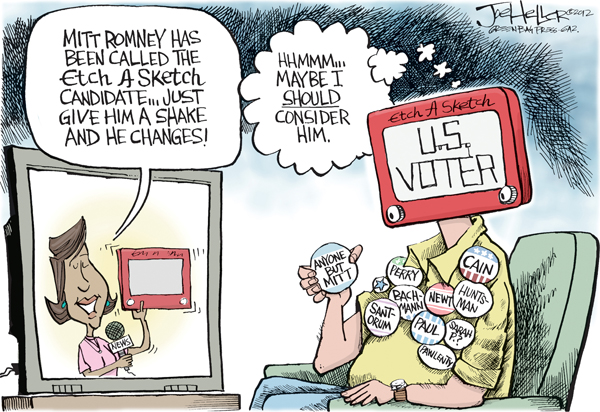 It is ironic that Republicans don’t like Mitt Romney for changing his positions, when they do the same thing about candidates trying to find “Anyone but Mitt”.

I’m often confused about the whole “flip-flopping” deal. Voters want candidates who respect their wishes. When Romney was running in a pro-choice state, he was pro-choice. But when running in the Republican primary, he is pro-life. Isn’t that respecting the wishes of the voters?

We had a president who stuck to his guns and stayed the course, no matter what. He was George W Bush. How did that work out?

Reality is nuanced. Politics seems not to be.

If you liked this, you might also like these related posts:
This was written by Iron Knee. Posted on Sunday, March 25, 2012, at 12:15 am. Filed under Irony. Tagged Elections. Bookmark the permalink. Follow comments here with the RSS feed. Both comments and trackbacks are currently closed.