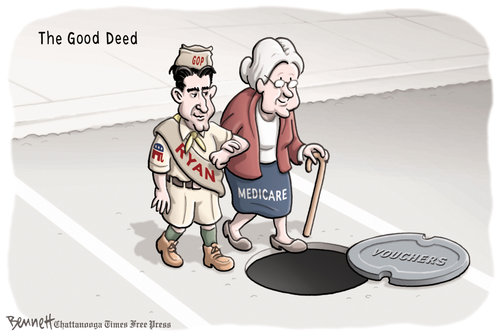 The Republicans are doubling down on their crazy budget that gives even more tax breaks to the rich, while replacing Medicare with vouchers that won’t even cover the cost of insurance for the ever increasing number of elderly citizens. It is clearly a cynical campaign ploy so they can claim they tried to cut taxes, reform entitlements, and cut the deficit through trickle-down economics (again) but Obama and the Democrats wouldn’t let them.

This was written by Iron Knee. Posted on Saturday, April 7, 2012, at 5:25 am. Filed under Irony. Bookmark the permalink. Follow comments here with the RSS feed. Both comments and trackbacks are currently closed.