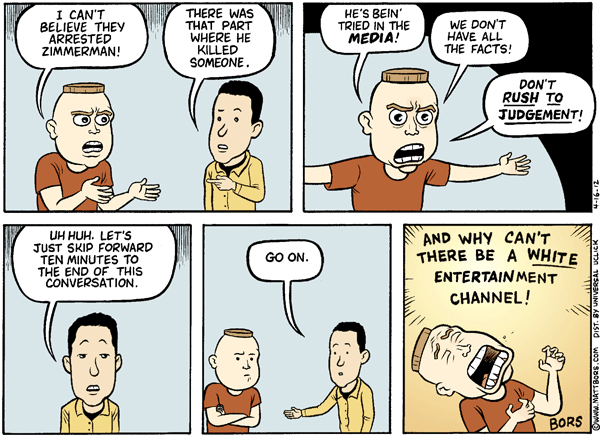 The obsession with trying people in the media is truly evil. It rarely leads to true justice, ruins lives, cost millions if not billions of dollars, and distracts us from real issues and problems.

And why do certain cases trigger a sustained media obsession, while thousands of equally compelling cases go completely ignored? There are answers for some of the cases — for example, O.J. Simpson was already a celebrity before his trial. But there must be hundreds of medical stories like that of Terry Schiavo, and hundreds of people like Trayvon Martin killed, every single day, who get nary a peep in the media.

UPDATE: Howard Kurtz talks about how the campaign has been hijacked by trivialities:

I started pondering this when we all got swept up in the spectacle of Hilary Rosen denigrating Ann Romney for not working (though rather than being deeply offended, the candidate’s wife proclaimed this an “early birthday present.”)

That, in turn, followed our collective enthrallment over Romney aide Eric Fehrnstrom describing their Etch a Sketch operation, which in turn followed the uproar over Rush Limbaugh calling a law student a slut, which followed…well, it’s hard to remember at this point.

Each of these episodes, considered separately, contains elements of substance that were soon overwhelmed by the rhetoric emanating from the media echo chamber. Collectively, they suggest that what should be a serious campaign in hard economic times has turned into a spectacle in which we are amusing ourselves to death.

This was written by Iron Knee. Posted on Sunday, April 22, 2012, at 12:47 am. Filed under Irony. Tagged Justice, Media. Bookmark the permalink. Follow comments here with the RSS feed. Both comments and trackbacks are currently closed.