Where For Art Thou Mitt Romney?

Michael Tomasky has an interesting article about the biography of Mitt Romney, and the ironic fact that the life of the man who might end up our next president is almost completely a liability — his childhood, his career, his faith, even his mostly undistinguished stint as governor. It seems like the only thing that is going for Romney is the fact that he is extremely rich, and is willing to say whatever it takes in order to get elected. Is this what politics has come to?

As Tomasky sums up:

Every aspect of his life story is in some way compromised. It’s not that he’s led a dishonorable life. But he’s led a remote and rarefied life, a life lived behind heavy doors and conducted in “quiet rooms,” as he famously said of the place where inequality is best discussed. It’s precisely in those quiet rooms where most Americans are ritually screwed, where decisions were made up through September 2008 that nearly destroyed the economy. That’s his America, and as he has shown with his unintended but brusque insults of working people, the folks in those quiet rooms don’t want to know the rest of us, and most of us don’t want to know them. It’s very striking that his Bain compatriots all testify to what a great guy he is, while Massachusetts state legislators, for example, found him on the whole aloof and obnoxious. 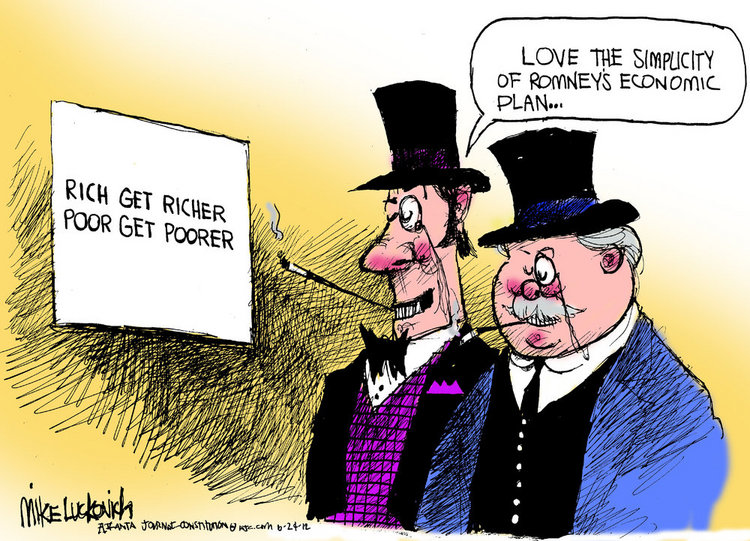 This was written by Iron Knee. Posted on Sunday, June 24, 2012, at 7:13 am. Filed under Irony. Tagged Elections. Bookmark the permalink. Follow comments here with the RSS feed. Both comments and trackbacks are currently closed.