The New York Times has an interesting read – “Five Obamacare Myths“. But they’re being generous, it really should be titled “Five Republican Lies About Obamacare”.

For example, when the House Republican majority recently voted (for the 33rd time) to repeal the Patient Protection and Affordable Care Act (aka Obamacare, or the ACA), their main claim was that it was a “job killer”. I guess they got tired of their previous lies (like “death panels”).

Calling Obamacare a job killer is a particularly interesting lie. It comes from the Congressional Budget Office (CBO) report on the impact of the ACA, where they estimated the law would “reduce the amount of labor used in the economy” by about 800,000 jobs. Republicans seized on this to claim that the ACA is a job killer. But according to the CBO, the main driver of this is that many people — no longer dependent on their current job for health insurance — will probably decide to retire earlier or switch to a part-time job. The best part is that this would open up those jobs for other people who need them, so it would actually reduce unemployment, even though technically some people would stop working — but these are people who want to stop working.

The job killer claim has been repeatedly exposed as a lie by fact checking organizations. FactCheck.org has debunked it so many times that when they did it again in February they used the headline “GOP’s ‘Job-Killing’ Whopper, Again — Republican attack ads peddle a shopworn, overblown claim about the health care law’s effects“. They also listed it as one of the “Whoppers of 2011”.

Indeed, the Republican’s own Romneycare in Massachusetts was the model for Obamacare, and there is no evidence that it was a job killer. And there is plenty of evidence that health care reform could be a job creator, fueling the economy by reducing out-of-control health care costs and increasing the health of American workers.

Related to the “job killing” lie is the lie that the ACA is a “Federal takeover of health care”. This would be laughably funny if it weren’t so sad. The ACA “delivers millions of new customers to the private insurance industry.” Calling it a federal takeover is a joke. Again, the model for Obamacare and Romneycare was cooked up by the very conservative Heritage Foundation as a conservative solution in order to avoid what they called a government takeover of health care in the form of Hillarycare. It was their own idea in order to prevent a government takeover, but that doesn’t stop them from calling it a government takeover now.

But what is truly sad is that if the Republican do manage to win the presidency and Congress in the upcoming election and repeal the ACA as they have repeatedly promised to do, people will die as a result. Lots of people. Far more people than have died from terrorist attacks. As many as 30 million people will lose the health insurance they would get from Obamacare.

And yet, the Republican propaganda barrage has managed to make the general population mostly apathetic to Obamacare. Some of this is because Congress added excessive delays to the implementation of Obamacare. When Romneycare was signed into law in 2006, it became effective almost immediately and was instantly popular in the state and remains so (the only person who seems to not like it is the person who created it and signed it into law, Romney himself).

Given the public apathy to Obamacare, Democrats seem to be afraid to defend it, which is a shame:

There’s no reason except cowardice for failing to mount a full-throated defense of the law. It is not perfect, but it is humane, it is (thanks to the Supreme Court) fiscally viable, and it comes with some reasonable hopes of reforming the cockeyed way we pay health care providers.

I can easily imagine a campaign ad defending Obamacare and using the biting one-liner from David Cutler (Harvard professor and formerly on Bill Clinton’s Council of economic advisors and health care advisor to Obama’s first presidential campaign): “Never before in history has a candidate run for president with the idea that too many people have insurance coverage.” 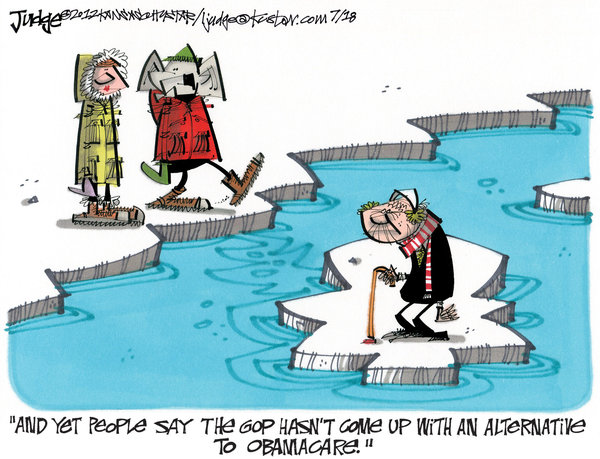 If you liked this, you might also like these related posts:
This was written by Iron Knee. Posted on Thursday, July 19, 2012, at 7:51 am. Filed under Irony. Tagged Health. Bookmark the permalink. Follow comments here with the RSS feed. Both comments and trackbacks are currently closed.