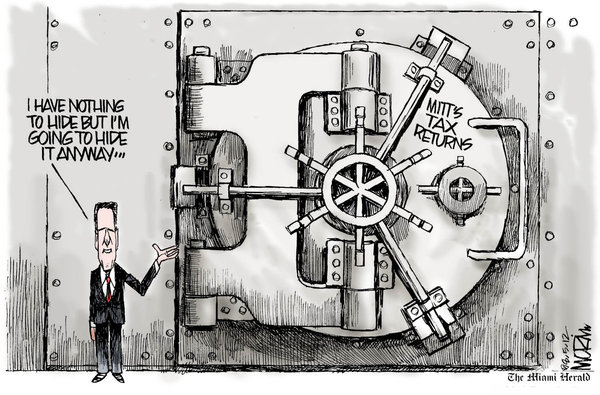 Considering that Mitt Romney’s father said politicians running for president should release 12 years of tax returns, and that Mitt himself, when he was running for the Senate against Edward Kennedy, called for Kennedy to release his tax returns, that there must be some really embarrassing reason why Romney won’t release his.

UPDATE: The blog-o-sphere (including Markos of the Daily Kos and others) is speculating on the identity of the person who told Harry Reid that Romney hadn’t paid any taxes. The fingers are pointing at the father of former presidential candidate Jon Huntsman.

UPDATE 2: Jon Huntsman Sr. denies that he is Harry Reid’s source, or that he even knows anything about Romney’s tax returns. Nevertheless, he feels that Romney should release more tax returns, saying “I feel very badly that Mitt won’t release his taxes and won’t be fair with the American people.”

This was written by Iron Knee. Posted on Thursday, August 9, 2012, at 1:32 am. Filed under Hypocrisy. Tagged Taxes. Bookmark the permalink. Follow comments here with the RSS feed. Both comments and trackbacks are currently closed.