“It’s only been six days that they’ve been together as a ticket, and already Paul Ryan is flip-flopping on everything. All week long, Romney has been attacking Obama on his $700 billion in Medicare cuts. Apparently Ryan in his plan had the exact same thought, until yesterday when Romney announced that Ryan had changed his position. They say this happens to everybody who gets too close to Mitt Romney. Suddenly your most firmly held beliefs just vanish. In fact the only way to avoid it is by only looking at a reflection of Romney in the mirror.” – Bill Maher

“Only one publication had a reporter with Mitt Romney and Paul Ryan on day one, ‘People Magazine.’ Or as Mitt Romney calls it ‘Corporation Magazine’.” – Stephen Colbert

“Are you excited about Paul Ryan? He’s a far, far-right ideologue. The Republican base loves him. He’s kind of an English-speaking version of Sarah Palin.” – Bill Maher

“Paul Ryan wants to dismantle Medicare as we know it, cut way back on unemployment benefits, raise taxes on the middle class, give much bigger tax breaks for the rich people. Or as your idiot brother-in-law puts it, ‘Finally someone who cares about me’.” – Bill Maher

“This ticket is supposed to be so anti-government and pro-business. Paul Ryan has been in government his whole life, practically from kindergarten. You know what the only business experience Paul Ryan guy has? As a teenager he drove the Oscar Mayer Wienermobile. A Republican inside a wiener. Usually it’s the other way around.” – Bill Maher

“New Rule: Stop implying that this Romney/Ryan bromance is somehow gay. You act like you’ve never seen an older millionaire take a bright young lad under his wing, dress in matching outfits and exchange doting looks while teaming up to save the country. It happens all the time and there’s nothing gay about it.” – Bill Maher

“Mitt Romney is predicting that as president, he will create 12 million jobs in his first term. Well, President Obama says a Romney presidency would result in lost jobs. Yeah, his and Biden’s.” – Jay Leno

“President Obama said today he is sticking with Joe Biden. Which means one of two things – either he thinks Biden is doing a good job or Hillary said no.” – Jay Leno

“There are these groups now called ‘Dark Money groups.’ Karl Rove heads one; the evil Koch brothers head another. They have spent more money on TV ads than all the Super PACs combined. They are called dark money groups because they don’t have to reveal where the money is coming from — no identity. It’s the fundraising version of a glory hole. Karl Rove is on all fours in the bathroom stall and whatever comes through that hole, he sucks.” – Bill Maher

“New Jersey Gov. Chris Christie is doing the keynote speech at the Republican Convention. He didn’t want to, but they’re going to lure him in by having Paul Ryan drive the Wienermobile.” – Bill Maher

“President Obama said today he’s working on a plan to release oil before November to lower gas prices. It will be released from our Strategic Election Reserves.” – Jay Leno

“A new study found that about one percent of the U.S. population is allergic to gluten, while the other 99 percent are sick of having to hear about it.” – Jimmy Fallon 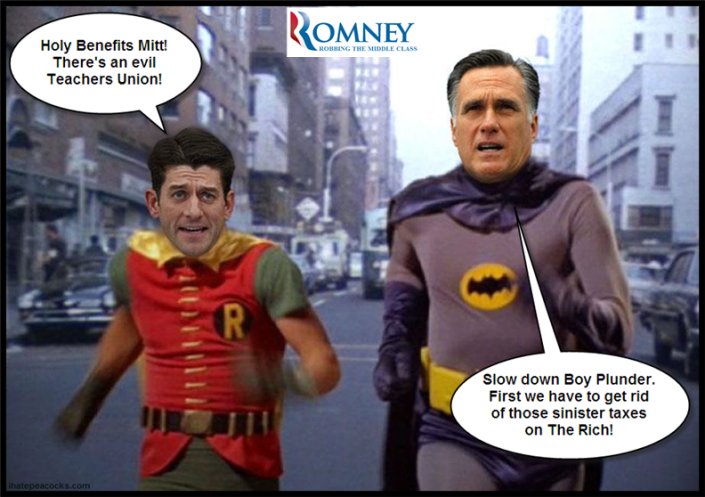 This was written by Iron Knee. Posted on Friday, August 24, 2012, at 10:38 am. Filed under Humor. Bookmark the permalink. Follow comments here with the RSS feed. Both comments and trackbacks are currently closed.