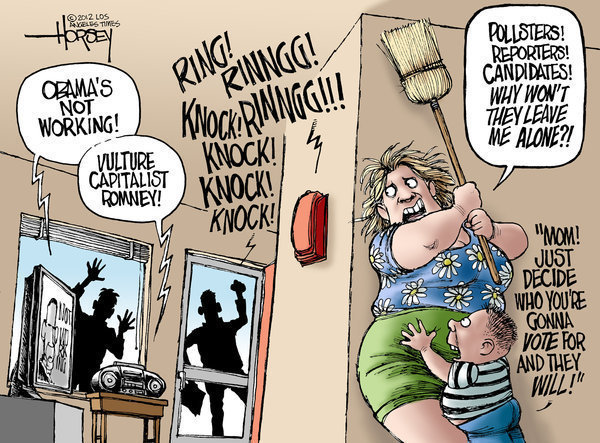 So let’s add this up. Polls say that around 98% of Americans have already decided whether they are going to vote for Barack Obama or Mitt Romney. But the more important number is actually smaller, since we only care about likely voters (people who are probably going to vote). So at most about half that, or 1%.

But it is even worse that that. Even if you’re an undecided voter, you might live in a state that is strongly tilted to one candidate or the other. Since most states are “winner take all”, your vote is very unlikely go make any difference.

There are around eight states that could possibly go one way or the other. So a very generous guess is that there are at most half a million people that can be swayed one way or the other. And both sides are spending hundreds of millions of dollars trying to sway them. As David Horsey notes, wouldn’t it be so much simpler to take all that money to just buy their votes?

Of course, it is just as likely that the undecided voters will tune out long before election day and just stay home. Especially because of all the negative ads, which become tiresome very quickly. Therefore, probably the best thing that could be done with all the campaign money is for each side to make sure they turn out their supporters to vote.

That’s probably what it is going to come down to.

This was written by Iron Knee. Posted on Tuesday, September 18, 2012, at 1:16 am. Filed under Irony. Tagged Elections. Bookmark the permalink. Follow comments here with the RSS feed. Both comments and trackbacks are currently closed.