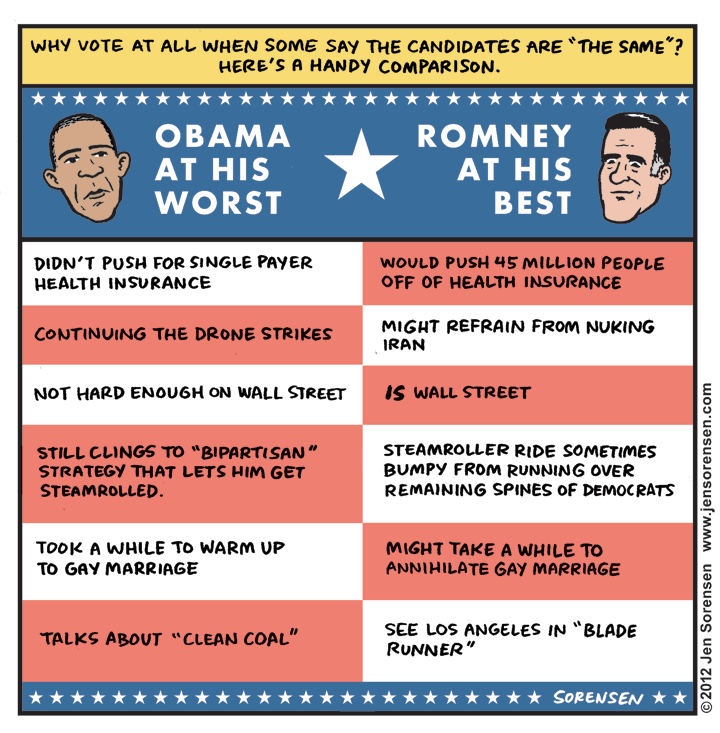 Jen Sorensen’s comments about her comic:

I find that people who spew the platitude that “the candidates are the same” tend to be the ones who have the least to lose if the wrong candidate is elected. At risk of sounding melodramatic, these elections truly are a matter of life and death. If you end the Affordable Care Act and millions of Americans lose their health insurance, people will die as a result. A recent estimate puts the number at 26,000 deaths per year due to lack of insurance; that’s more than a few September 11ths. Then there’s the Global Gag Rule, which Romney would reinstate. It rarely gets mentioned, but this policy wreaks havoc on women in impoverished nations. Romney would also end contributions to the U.N. Population Fund, which combats the spread of HIV and prevents 22,000 deaths annually.

These are but a few examples. Turning Medicare into a voucher program, radicalizing the Supreme Court for a generation, and displaying an open hostility toward science probably won’t help things either. Obama isn’t perfect, but as far as I’m concerned, voting is a moral arithmetic problem with a clear answer.

This was written by Iron Knee. Posted on Thursday, November 1, 2012, at 3:36 am. Filed under Irony. Tagged Elections. Bookmark the permalink. Follow comments here with the RSS feed. Both comments and trackbacks are currently closed.