What I find ironic about all this is that even though Mitt Romney claims to be a good businessman, even businesses are waking up to the fact that they have to do something about climate change. 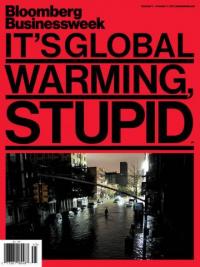 Take the recent cover article from Bloomberg Businessweek, which quotes an insurance company warning that there has been “a nearly quintupled number of weather-related loss events in North America for the past three decades.” Their solution is financial incentives to reduce greenhouse gasses, including the cap-and-trade legislation that passed the House in 2009, but which “died in the Senate in 2010, a victim of Tea Party-inspired Republican obstructionism”.

Or take an editorial in Forbes magazine last month (before Hurricane Sandy), which stated:

The drumbeat of a warming climate, worsening weather, and the resulting human toll continues, and keeps getting louder. At this point, it should be deafening enough to wake up anyone still denying the reality of a new normal for our climate, our weather, and the insurance companies whose stability underlies our economy.

Or the statement from insurance company Allianz:

With 40 percent of industrial insurance claims that Allianz now pays out being due to natural catastrophes, climate change represents a threat to our business… Insurance companies need to adapt their products and services to take climate change risks into account. Already, insurance payments relating to climatic events are increasing rapidly, with a 15-fold increase in weather-related claims over the past 30 years.

The bottom line is that we have to stop asking questions like “Did climate change cause Hurricane Sandy”. That’s like asking if the use of performance enhancing drugs caused Lance Armstrong to win the Tour de France. Or to use a baseball analogy:

We can’t say that steroids caused any one home run by Barry Bonds, but steroids sure helped him hit more and hit them farther. Now we have weather on steroids.

And yet, Romney opposes any cap-and-trade legislation, opposes Obama’s new fuel efficiency standards, opposes any regulation of carbon dioxide emissions. And as you can see in the above video, he considers climate change a joke.

This was written by Iron Knee. Posted on Monday, November 5, 2012, at 3:43 am. Filed under Hypocrisy. Tagged Climate. Bookmark the permalink. Follow comments here with the RSS feed. Both comments and trackbacks are currently closed.