As if it wasn’t bad enough that corporations have been given the rights of people, now we see in plain sight that corporations have become our version of an aristocracy, with rights above and beyond what are given to “normal” people. But what else can you think when a large, multi-national bank admits to extremely serious crimes — including manipulating interest rates, aiding terrorists, and laundering money for drug cartels — and their punishment is no worse than a slap on the wrist?

State and federal authorities decided against indicting HSBC in a money-laundering case over concerns that criminal charges could jeopardize one of the world’s largest banks and ultimately destabilize the global financial system.

They are now above the law.

In fact, they are being rewarded. The government is bragging about their record $1.92 billion settlement with HSBC for their wrongdoing, but the good news that they aren’t even being indicted for their crimes has pushed their stock price up 10% in the last month, raising their market capitalization by $19 billion. Who is laughing all the way to the bank now? $1.9 billion may sound big but HSBC’s profits last year were $21.9 billion.

As Matt Taibbi puts it “Outrageous HSBC Settlement Proves the Drug War is a Joke“.

Or as Glenn Greenwald notes, the same day that the government let HSBC off from criminal prosecution for massive drug laundering, they sentenced a 27-year-old black single mother of three to life in prison without parole for a minor drug offense — her former boyfriend had hidden a lockbox containing a half kilo of cocaine in her attic without her knowledge. Even the judge in the case said that what she had done “does not warrant a life sentence” but he had no choice due to strict sentencing laws. 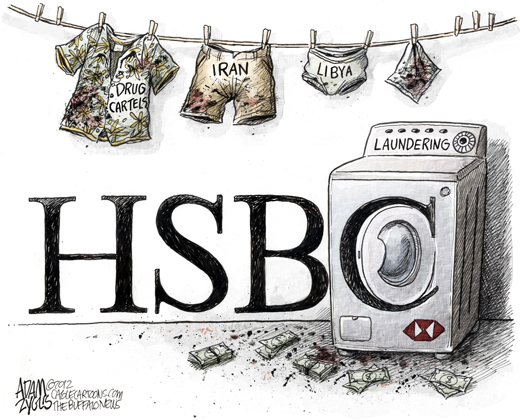 This was written by Iron Knee. Posted on Friday, December 21, 2012, at 12:23 am. Filed under Hypocrisy. Tagged Banks, Drugs. Bookmark the permalink. Follow comments here with the RSS feed. Both comments and trackbacks are currently closed.