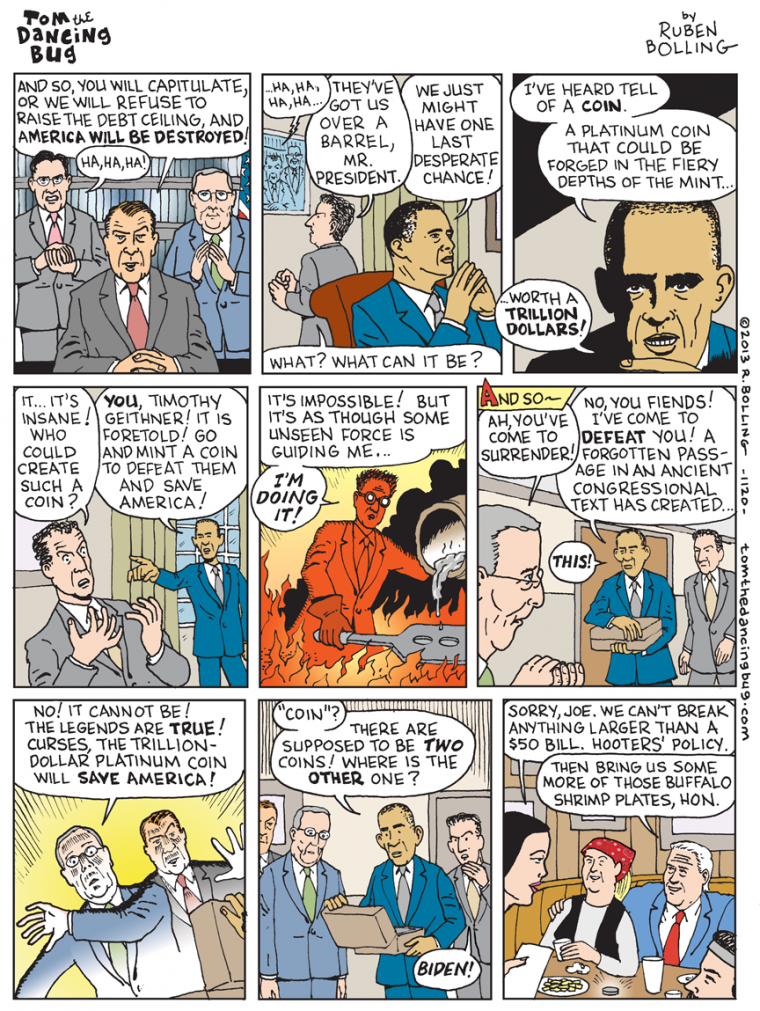 I’m not totally sure if the originators of the idea of the US minting a trillion dollar coin were serious, but a former head of the US mint claims that the idea would work and would be totally legal.

Then for an added twist of irony, Fox News once again shows that reality has nothing to do with their thinking. They miss the whole point, which is that it would be minted as a trillion dollar coin, and instead fixate on the red herring that it is made of platinum. And they further somehow think that the coin would have to contain a trillion dollars worth of platinum, as if any US coin contains its weight in precious metals. Personally, as long as we are trying hail-mary runarounds to the whole fiscal cliff silliness, I think a better strategy would be to just declare the (stupid) law that created our (stupid) debt limit unconstitutional, since it pretty clearly violates the 14th Amendment to our constitution. And Bloomberg has a list of even crazier ideas to avoid another debt crisis.

But instead, I’ll just let Jon Stewart have the last word on the trillion dollar coin, and wonder when our Congress, who have become less popular than cockroaches, colonoscopies, and root canals, is going to stop screwing around and actually do something useful:

UPDATE: The Administration now says they will not mint a trillion dollar coin, nor would the Federal Reserve accept it even if they did. It is ironic that the author of the part of the bill that made this whole platinum coin deal possible in 1997 is a Republican.

UPDATE 2: Matthew Yglesias at Slate has a nice little postscript on this whole thing:

I’m glad we had this conversation. Direct discussion of the platinum coin was a good reminder that many people, including influential media figures, appear to have no idea what money is or how the monetary system works. Apart from the shockingly widespread view that the value of coins is determined by their metallic content, there was a lot of insistence that creating money was somehow an act of “magic.” In fact, the way all legal currency is created is that a government agency creates the money. Typically that’s the Federal Reserve accommodating bank demand for base money. But all kinds of things can happen. Forget “Quantitative Easing.” When the Fed does the thing that reporters call “raising interest rates” it doesn’t pull an interest rate lever. It sells bonds on the open market in exchange for money. And when that money enters the Fed, it vanishes. When they “lower interest rates” they buy bonds on the open market in exchange for money. Where do they get the money? From nowhere. They just make it. That’s money. Whether the electronic process of attributing more or less money to an account is accompanied by a little piece of platinum or not is wholly irrelevant.

This was written by Iron Knee. Posted on Saturday, January 12, 2013, at 6:44 am. Filed under Humor, Irony. Tagged Deficits, Economy. Bookmark the permalink. Follow comments here with the RSS feed. Both comments and trackbacks are currently closed.