If at first you don’t succeed… 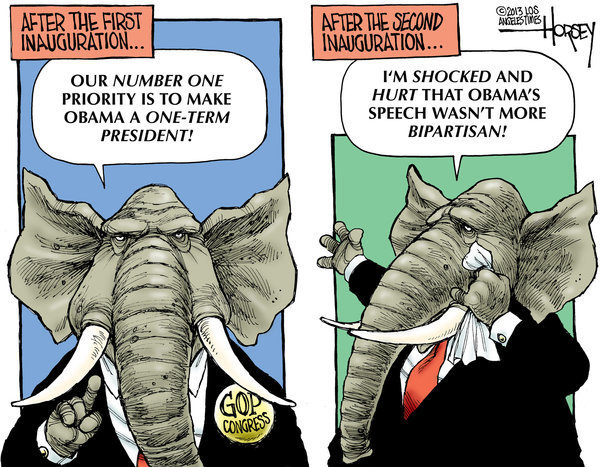 After four (long) years of Obama bending over so far backward that he ended up looking more like a Republican than a Democrat, and getting nothing but hatred and contempt thrown back in his face, it takes a lot of chutzpah to accuse the president of not being bipartisan enough. Heck, Obama’s signature achievement — health care reform — was virtually copied from Republican proposals (including Romneycare), yet the Republicans attacked it as the worst thing ever to happen to the USA, and vowed to repeal it.

They filibuster just about everything, block Obama’s appointments, call him a liar, and compare him to Hitler. They even claim that he wasn’t born in the USA.

Now they are saying that their priority is to outlaw abortion, even though 70% of Americans support abortion rights, including a slim majority of Republican voters.

Will the GOP ever stop being the party of NO?

UPDATE: Great quote from Obama: “The truth of the matter is that my policies are so mainstream that if I had set the same policies that I had back in the 1980s, I would be considered a moderate Republican.”

This was written by Iron Knee. Posted on Sunday, January 27, 2013, at 12:30 am. Filed under Irony. Bookmark the permalink. Follow comments here with the RSS feed. Both comments and trackbacks are currently closed.