“There’s a photo from the Inauguration in which Former President Bill Clinton appears to be checking out Kelly Clarkson. Clinton said, ‘That’s not true, I was checking out Beyonce and Kelly Clarkson got in the way’.” – Conan O’Brien 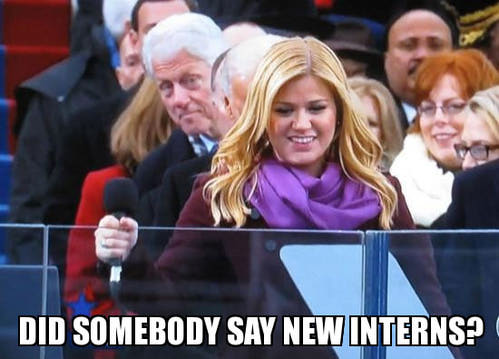 “Beyonce is remaining silent about charges that she lip-synched the national anthem. However, the charges are being strongly denied by a recording of Beyonce.” – Conan O’Brien

“Yes, lip-gate. Beyonce-gate. The crisis in Lip-ya. Beyonc-gazi … If Beyonce lip-synced at Obama’s inaugural, do you know what that means? If so, please write in because I’d love to know why I’m so angry!” – Stephen Colbert

“Steven Tyler defended Beyoncé after she lip-synced at President Obama’s inauguration. Tyler said, “I know how she feels, I did the same thing at the Harry Truman Inauguration.'” – Conan O’Brien

“Joe Biden made another one of his famous gaffes on camera Monday, saying he was proud to be president of the United States. I guess he forgot he wasn’t at home standing in front of the bathroom mirror.” –Jay Leno

“Arnold Schwarzenegger has signed on to a new ‘Terminator’ film. Due to his age, this one features the catchphrase, ‘I’ll be back right after ‘Wheel of Fortune.'” – Conan O’Brien

This was written by Iron Knee. Posted on Friday, February 1, 2013, at 2:52 am. Filed under Humor. Bookmark the permalink. Follow comments here with the RSS feed. Both comments and trackbacks are currently closed.