Backwards to the Future! 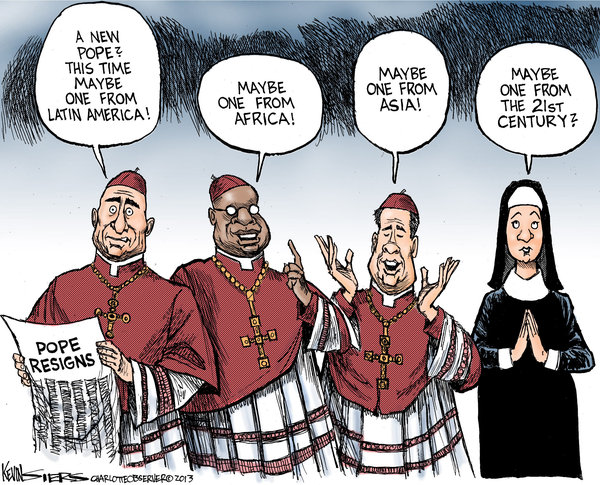 If the Catholic Church isn’t going to look to the future, how about going all the way back to the past?

Ed Stein has a novel idea:

It’s time for the Church to think outside the box. Pope Benedict is the first Pope to resign in six centuries. If you’re going to go back to old traditions, why not go all the way back to the beginning? All the early disciples were Jewish. Saint Peter, the founder of the Church, was Jewish. Why not a Jewish Pope?

Look, at a time when the Catholic Church seems focused on losing as much influence as possible in the West, what better way to accelerate the trend than to appoint a rabbi as Pope? Let’s face it: nobody listens to rabbis.

Oh, sure, virtually every congregation has one, and rabbis perform essential functions like giving sermons and officiating at bar mitzvahs and weddings and funerals, but no matter how many times they ask their congregants to keep kosher and not work or shop on the sabbath or fast on Yom Kippur, they’re pretty much universally ignored.

Also, because the rabbinate doesn’t answer to a central authority, priests under a Jewish Pope would be a lot more free to deal with the individual needs of their own congregations without the heavy hand of Rome interfering all the time. So each individual congregation would be free to ignore its own rabbi rather than having to go to the trouble of tuning out the entire Vatican.

Finally, a Jewish Pope would most likely be married. Getting rid of the absurd prohibition against priests marrying would go a long way toward putting the whole ugly pedophile scandal to rest for good. Rabbis, unlike priests, actually have some experience with marriage and sex, and a Jewish Pope would not have a lot of patience with priests who torment boys. He would understand that that’s a job reserved for Jewish mothers, and that the abuse should be entirely emotional, not physical.

Besides, this way nobody could ever accuse the Catholic church of being anti-semitic. And it would also build a bridge to protestant evangelicals, who lately seem to be obsessed with Israel. I think it is an idea whose time has come.

This was written by Iron Knee. Posted on Saturday, February 16, 2013, at 7:42 am. Filed under Humor. Tagged Religion. Bookmark the permalink. Follow comments here with the RSS feed. Both comments and trackbacks are currently closed.