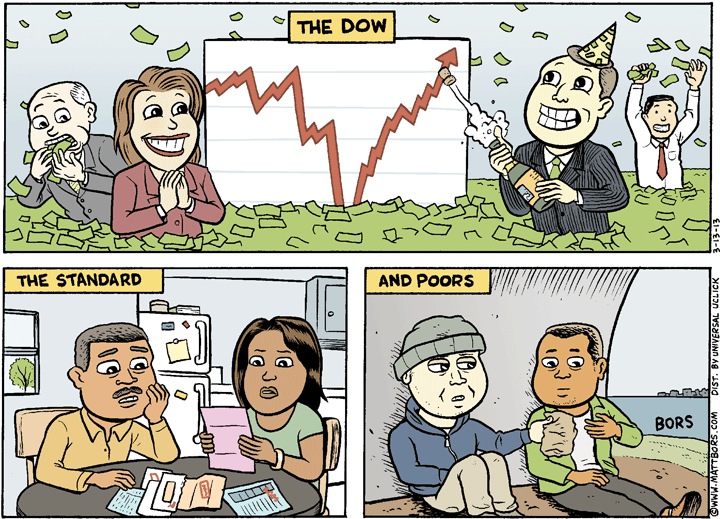 I don’t know why, but every time something financial keeps going up and up, despite there not being any particular reason for it doing so, I keep thinking that it is just another economic bubble about to burst. Have I really become that jaded? Or am I just one of the only sane people left?

Well, at least I’m not alone. Here’s a comment left on the above comic:

This is what happens when we have a demand side economic problem, persisting for several years, and the Federal Reserve keeps increasingly pushing supply side easing. The low interest rates, and now third round of bond buying keeps is supposedly pumping gobs of money into the system in the hopes of stimulating the economy. The problem is that the problem is not on the supply side. Banks have money to loan but aren’t loaning it. Businesses don’t need to expand to meet demand, so they are not expanding, meaning no jobs are being created. Both are looking for some place to stash all the cash that they have become bloated with and it is currently going into the stock market. This is what is driving the DOW up. It is yet another artificial bubble. The consumer of course gets to hold the damned empty bag by paying for it through inflation, which only exacerbates the demand side problems.

What I don’t get is why is it considered acceptable to give all this money to those entities who already have too damned much and are absolutely choking on it, but not to give any to those who desperately need it? Why is it considered acceptable to spend billions of dollars in foreign countries to aide them, yet here we’re cutting off unemployment benefits when people can’t get jobs. Unemployment figures down doesn’t equate to employment being up. In this case it is indicates the ranks of those who’ve fallen off the list and probably into despair.

If money were injected in at the bottom of the economy, it would work its way up through the supply chain, with the effect compounded several times over. When it is injected at the top, only a small fraction makes its way down and now, even that isn’t happening.

Remember the cash for clunkers deal? What was probably the most short lived of all the economic stimulus ideas and the one most loathed by those in power? It had an effect up and down the supply chain, from the consumer all the way to the steel mills.

Eventually this bubble is going to burst and when it does, look out below.

This was written by Iron Knee. Posted on Saturday, March 16, 2013, at 12:38 am. Filed under Irony. Tagged Economy, Wall Street. Bookmark the permalink. Follow comments here with the RSS feed. Both comments and trackbacks are currently closed.