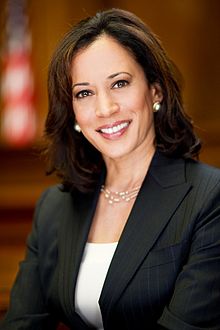 “President Obama is in trouble for saying that California Attorney General Kamala Harris is good looking. When asked for comment, Bill Clinton said, ‘That guy is out of control’.” – Conan O’Brien

“Because Obama said California Attorney General Kamala Harris was attractive, people are calling his remark sexist. Now the President is overcompensating and trying to balance it out. Today he said Attorney General Eric Holder has a great ass.” – Jay Leno

“Little is known about North Korean dictator Kim Jong Un other than the fact that he is ruthless, he supports torture, and he is a huge basketball fan. I’m sorry, that’s not Kim Jong Un. That’s Rutgers basketball coach Mike Rice. I had them confused.” – Jay Leno

“Dennis Rodman is on the show tonight, fresh off his trip to North Korea and his appearance on ‘Celebrity Apprentice.’ I’m gonna ask him what it was like to spend time with a crazy power-hungry madman – and then we’ll talk about Kim Jong Un.” – Jimmy Fallon

“Here’s something I didn’t know. When Vice President Biden and President Obama meet for lunch at the White House, the chef goes out of his way to personalize their meals. For example, Biden’s lunch always comes with a toy.” – Jay Leno

“There’s this trend now of politicians cutting their salaries by 5 percent because of budget cuts – except for Vice President Joe Biden. He won’t do it. Though in fairness, it’ll take Biden at least a month to figure out what 5 percent of his salary is.” – Jimmy Fallon

If you liked this, you might also like these related posts:
This was written by Iron Knee. Posted on Monday, April 15, 2013, at 12:26 am. Filed under Humor. Bookmark the permalink. Follow comments here with the RSS feed. Both comments and trackbacks are currently closed.