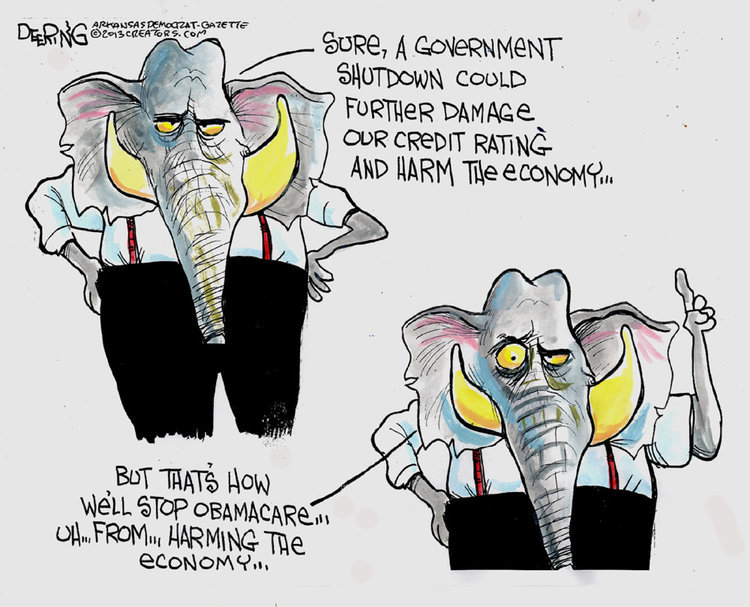 The GOP actually has a website where they explain why they are opposed to Obamacare. Interestingly, it was published in March 2011 (over two years ago) so we can check on some of their claims.

For example, did you know that the individual mandate is unconstitutional? Unfortunately for the GOP, the Supreme Court disagreed.

They claim that Obamacare will increase healthcare costs. But instead since Obamacare passed, the growth in health care costs have fallen to their lowest rates in 50 years.

As for their arguments about tax hikes and deficits, well, the above cartoon says it all.

The current Republican strategy is the stupidest thing imaginable. Jonathan Chait explains it in “Ted Cruz Turns Obamacare Defunding Plan From Disaster to Utter Fiasco“. Simply put, in order to defund Obamacare, Senate Republicans have to filibuster the bill passed by their colleagues in the House. That’s right, the defunders have to filibuster their own bill forever. That will keep them busy!

UPDATE: Bill O’Reilly on Fox News calls the attempt to defund Obamacare “fanaticsm on the right” that is harming the country. “There’s no way Obamacare is going to be defunded. It’s not gonna happen. So why bother alienating independent americans by embracing a futile exercise?”

This was written by Iron Knee. Posted on Monday, September 23, 2013, at 12:31 am. Filed under Irony. Tagged Health. Bookmark the permalink. Follow comments here with the RSS feed. Both comments and trackbacks are currently closed.