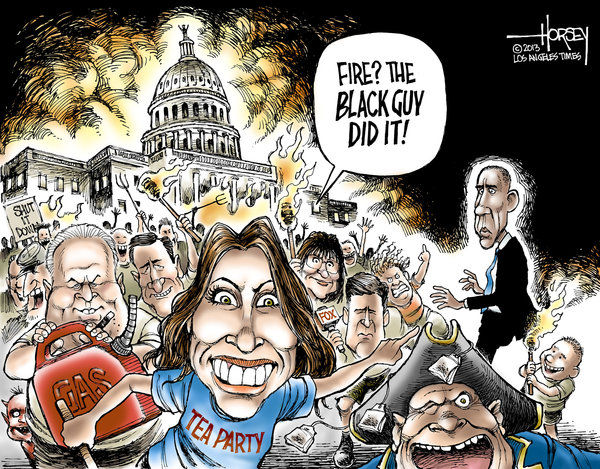 David Horsey has written some very good commentary to go with his comic. I just want to pass it on:

The government shutdown has revealed the impressive skill of tea party Republicans to say untrue things with sincerity so convincing that they almost sound as if they believe what they are saying. Michele Bachmann, with her toothy grin and startling wide-eyed stare, is especially adept at this.

The other day, the queen of the House tea party was standing before the TV cameras at the World War II Memorial with her arm around a frail-looking veteran of that war. A group of ancient vets had come to the capital for an event at the memorial only to find they couldn’t get in because of the government shutdown. Bachmann fawned over the elderly man while telling reporters how utterly shameful it was for President Obama to lock out these venerable old soldiers. The shutdown was the president’s fault, she said; he was to blame for inflicting so much unnecessary inconvenience and pain.

This is the same woman who has been absolutely giddy in other interviews talking about how “very excited” she and her colleagues are, as if the shutdown is the best thing since Jesus turned water into wine. “It’s exactly what we wanted, and we got it,” Bachmann said to the Washington Post.

On Sunday, House Speaker John A. Boehner was acting like a jilted girlfriend in an interview with George Stephanopoulos on ABC. Boehner insisted Obama’s refusal to give him a phone call is the reason government offices remain shuttered. Boehner, of course, could end the impasse all by himself simply by allowing a vote on the Senate-passed continuing resolution to fund the government. It would easily get thumbs-up from Democrats and a significant share of Republican House members, but letting that happen would earn Boehner major grief, not only from the radicals in his caucus, but from the rich conservative money men who spearheaded the drive for this showdown.

And that is the highly pertinent fact that Boehner, Bachmann and the rest of the Republicans conveniently fail to mention. As detailed in a Sunday New York Times story, a well-financed cohort of conservative activists have been planning for months to use a government shutdown as a cudgel to cripple the Affordable Care Act, also known as Obamacare. Among those behind the effort are, predictably, the Koch brothers, the right-wing billionaire industrialists who, the newspaper reports, gave out $200 million last year to anti-Obamacare groups. Another key leader is a figure from the dark past, Richard Nixon’s former attorney general, Edwin Meese III.

Also pushing the Obamacare battle is Michael A. Needham, who runs the political arm of the conservative Heritage Foundation. Unlike Bachmann and her buddies, Needham did not play coy when asked about what is going on, telling the New York Times, “We felt very strongly from the start that this was a fight that we were going to pick.”

And it’s the fight they got. Republicans should stop feigning innocence and be brave enough to own it.

This was written by Iron Knee. Posted on Tuesday, October 8, 2013, at 12:24 am. Filed under Hypocrisy. Tagged Shutdown. Bookmark the permalink. Follow comments here with the RSS feed. Both comments and trackbacks are currently closed.