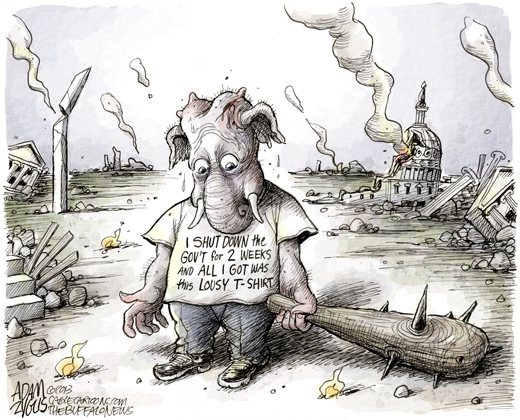 Ted Cruz seems to think that the government shutdown was “a remarkable victory” and when the shutdown ended, he claimed “The American people rose up and spoke with an overwhelming voice and at least at this stage Washington isn’t listening to them”. But fully 70% of Americans think that Republican politicians put politics ahead of their country, and the shutdown actually improved the popularity of Obamacare.

So who isn’t listening?

The shutdown was a complete disaster for the Republican Party. As one pollster put it “If it were not so bad for the country, the results could almost make a Democrat smile. These numbers lead to one inescapable conclusion: The Republicans are not tone deaf; they are stone deaf.”

This was written by Iron Knee. Posted on Saturday, October 19, 2013, at 7:40 am. Filed under Irony. Tagged Shutdown. Bookmark the permalink. Follow comments here with the RSS feed. Both comments and trackbacks are currently closed.