Very interesting study done at Yale comes to some surprising conclusions about how our politics can override rational thinking.

The study did this by giving people a math problem to solve. The problem presented the results of a fictional medical trial for a new skin cream designed to treat rashes. Half the participants in the study were shown the following results:

To remove any bias, they gave the other half of the participants the same problem with the results reversed, so the skin cream increased the chances of getting better.

This is actually a tricky problem to solve — 59% of the participants got the answer wrong.

They also grouped the participants in the study based on how numerate (“numerically literate” or “scientifically trained”) they are. Not surprisingly, numerate people did better on the problem.

Finally, they grouped the participants based on whether they are liberal democrats or conservative republicans. In this regard, there was no difference. Regardless of your politics, the more numerate you are the better you are at answering this question.

So far so good, but now we get to the interesting part of the study. They changed the problem, but only how they described it. Instead of a medical study, they presented it as the results of cities that had banned the concealed carrying of guns, and whether crime in these cities had gone up or down afterward.

Participants performed much differently on this version of the problem, even though all the numbers were the same. As in the previous version, they had two variants of the problem: one where the correct answer was that crime went down; and the other where crime went up.

Now here’s the ironic part. Here are two graphs plotting correct answers versus participant numeracy. The top one is for the skin cream / rash version, the bottom one is for the gun control / crime version: 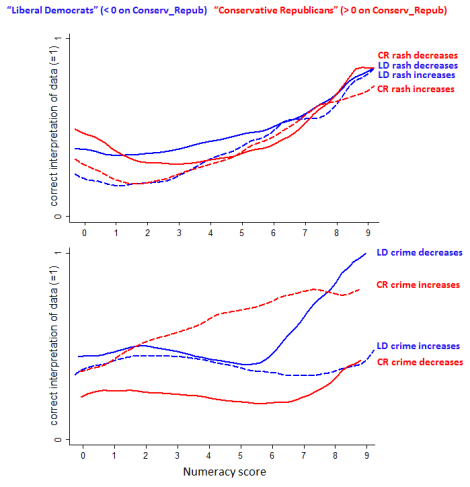 Ironically, the more numerate a participant is the more they are influenced by their politics. Numerate participants did 18% worse on the political problem. In fact the curves in the second graph are all over the place, sometimes even going down as numeracy goes up. It is difficult to guess what caused these crazy curves. If you are more scientifically literate, does it make you more sure of your answers, even when you are wrong? Are numerate people more likely to accept the incorrect answer on first glance, if it agrees with their politics? Or are they more willing to question an answer when it conflicts with their political beliefs?

At the very least it blows away the common idea that the smarter and more scientifically literate you are, the better you are at making correct decisions even when the right answer disagrees with your political beliefs. And this is true whether you are liberal or conservative.

This also helps explain why our country is so divided on the subject of climate change, regardless of the scientific research.

tl;dr — if this is too difficult to read and understand, here’s an infographic for you.

This was written by Iron Knee. Posted on Monday, December 9, 2013, at 11:19 am. Filed under Irony. Tagged Climate, Science Denial. Bookmark the permalink. Follow comments here with the RSS feed. Both comments and trackbacks are currently closed.