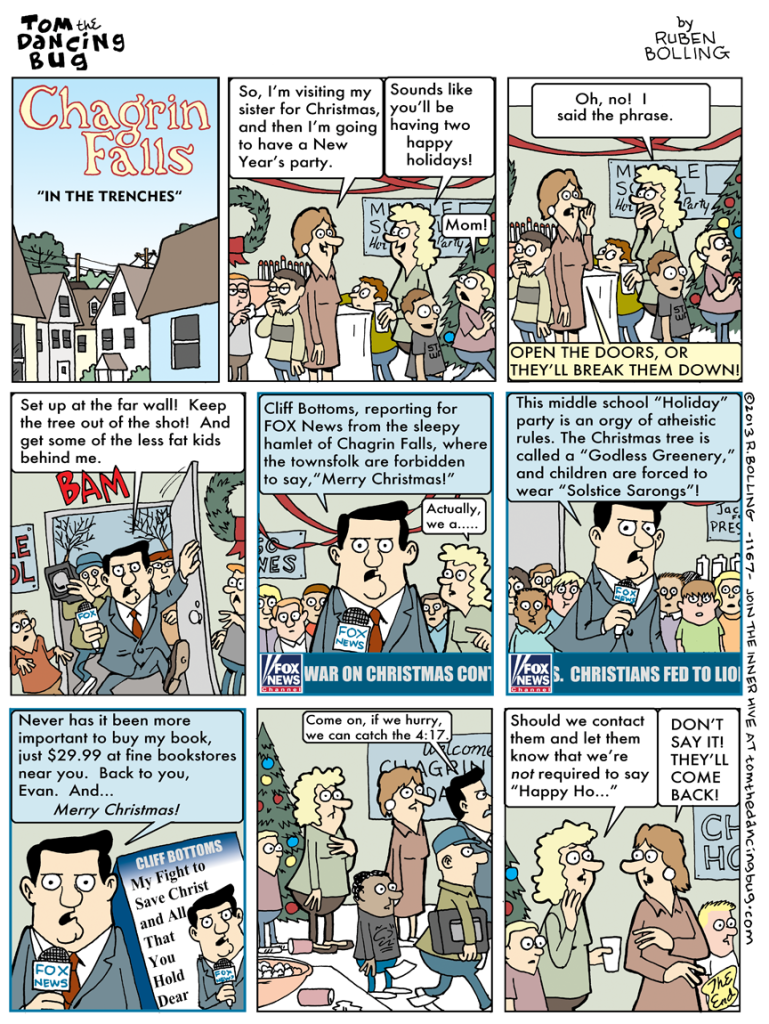 Sometimes real life is stranger than fiction. The inspiration for this comic started with a small disagreement in a small town in Texas over what to call the holiday party at an elementary school. As in the comic, Fox News jumped on this and printed a story that may have a teeny tiny nugget of truth somewhere, but then adds so many falsehoods on top of that that the truth gets buried. Consider the headline of the story “School bans Christmas trees, the colors red & green”. Never mind that nobody banned Christmas trees, let alone the colors red or green. I mean, seriously? A school would ban colors? Is this some kind of joke?

The Fox News article doesn’t even make sense. It refers to a recently passed law in Texas, called “The Merry Christmas Bill”, but this new law says only that people are allowed to call the winter holidays anything they please, including Christmas. It specifically doesn’t require anyone to call the holiday Christmas or anything else, it is supposed to let schools know that they can call it anything they want.

So the school decided that they wanted to call the party their “Winter Party”. But Fox News claims that by not calling it their “Christmas Party” that the school is violating the law. They even quote the author of the bill, who claims that the school is “flaunting” the law. They don’t want freedom of religion, they want government imposed religion, which ironically is exactly what the Pilgrims and other early European settlers to America were escaping from.

The second part of the comic is based on something Sarah Palin posted to Facebook about this. I have been trying my best to completely ignore Palin, but her quote shows how the right-wing nuts push the idiotic “War on Christmas” meme in order to make money:

Is there any doubt it’s imperative to protect the heart of Christmas? Take a look at this article about an elementary school in Texas banning Christmas trees and the colors red and green from a “winter” party. Just like I write about it “Good Tidings and Great Joy: Protecting the Heart of Christmas,” every day we see stories like this one, and we need to stiffen our spines, say “enough is enough,” and hold on to REAL hope, America! The real hope that IS the message of Christmas. We can remember and capture that spirit of true hope during this holiday season and commit to live it out every single day. I promise you, it works!

So, no matter what your religion or what holidays you celebrate, have a Merry Christmas and a Happy New Year!

This was written by Iron Knee. Posted on Saturday, December 14, 2013, at 12:29 am. Filed under Irony. Tagged Religion. Bookmark the permalink. Follow comments here with the RSS feed. Both comments and trackbacks are currently closed.