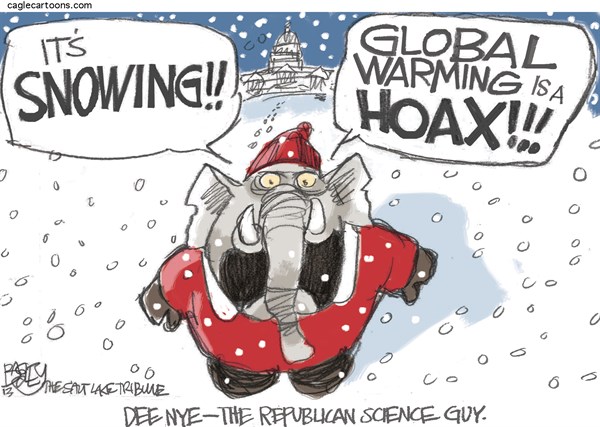 Is Dee Nye the evil twin sister of Bill Nye, the science guy?

The eastern half of the US is having a massive cold snap, and that can only mean that it is time for the climate deniers to come out of the woodwork. It doesn’t matter how many times that you explain to them that “climate” is not the same as “weather”. A side effect of climate change is that temperatures will become more extreme. So while the eastern US is freezing to death, even more other locations on earth will be feeling the burn instead. Indeed, we don’t have final numbers yet, but it looks like 2013 will have been the seventh hottest year on record.

Leading the climate deniers is Republican Senator James Inhofe, who on Monday called climate change science “laughable” and rigged. Ironically, his own home state of Oklahoma has recently been suffering through repeated severe droughts, and in 2011 had the hottest summer ever recorded in US history (hotter than 1934, the infamous “Dust Bowl” that led to the Great Depression).

This was written by Iron Knee. Posted on Wednesday, January 8, 2014, at 12:39 am. Filed under Irony. Bookmark the permalink. Follow comments here with the RSS feed. Both comments and trackbacks are currently closed.