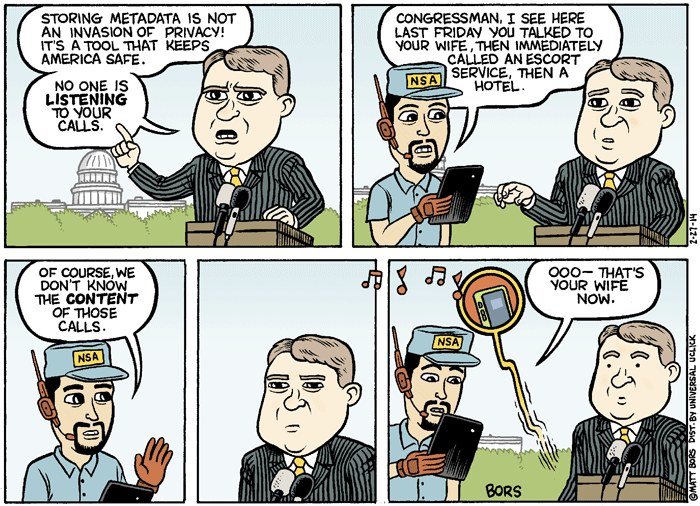 The fundamental problem with spying is that it assumes that you can trust the spies. Which seems like a system that is almost guaranteed to fail. Not only does absolute power corrupt absolutely (e.g., spies snooping on their love interests), but the “bad guys” we are trying to spy on have a huge incentive to compromise the spy organization itself. Consequently, there is a long history of double agents (and that’s just the ones we know about).

I find it interesting that despite the huge official furor over WikiLeaks, their revelations don’t seem to have made us particularly less safe in the world.

Don’t get me wrong. I think that there are things that are important to keep secret. But it seems like the pendulum has swung too far in one direction, and excessive secrecy has probably hurt our country more than any whistleblower ever will. Spying goes too far when it purposely subverts the rule of law, and there are plenty of examples of that.

This was written by Iron Knee. Posted on Tuesday, February 25, 2014, at 9:02 am. Filed under Irony. Tagged Spying. Bookmark the permalink. Follow comments here with the RSS feed. Both comments and trackbacks are currently closed.