The real problem is that our society is wasting greater and greater amounts of its resources on “financial wheeling and dealing”, which give nothing back in return. One expert puts the waste at several hundred billions of dollars a year. Indeed, since we started dismantling financial regulations around 1980, the percentage of GDP that is skimmed off by the financial services industry has doubled.

In addition, an increasing amount of financial time and energy now goes into speculation, which provides few if any benefits to society. Krugman concludes:

In short, we’re giving huge sums to the financial industry while receiving little or nothing — maybe less than nothing — in return. Mr. Philippon puts the waste at 2 percent of G.D.P. Yet even that figure, I’d argue, understates the true cost of our bloated financial industry. For there is a clear correlation between the rise of modern finance and America’s return to Gilded Age levels of inequality.

Meanwhile, we aren’t spending even close to that amount of money on things that are important. In particular, the UN Intergovernmental Panel on Climate Change has released a detailed report that shows that the cost of reversing climate change is actually amazingly low. They estimate that reducing the emission of greenhouse gases will reduce the median growth of consumption by a mere 0.06%. This is especially stunning when you realize that the cost of climate change, destruction due to increasingly unpredictable weather, sea level rise, crop failures, etc. will be far greater than that. In other words, doing nothing will cost us far more than cutting back our addiction to fossil fuels. An that doesn’t even include how much we will save by not repeatedly starting wars for oil.

And as Paul Krugman points out in a separate article, the costs of moving to sustainable energy are plummeting. 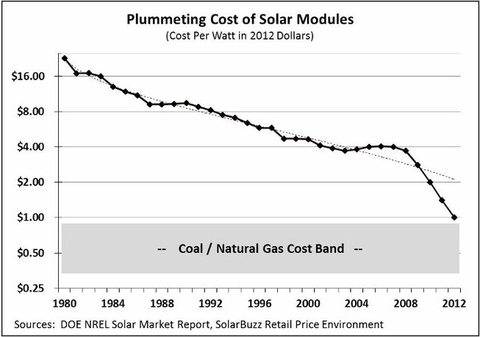 This graph shows that the cost of solar panels has plummeted, and as of 2012 is becoming competitive with coal and natural gas.

Another study shows that wind and solar energy are now 20% cheaper than nuclear power.

I’ve said it before and I’ll say it again. If we would stop subsidizing fossil fuels and give sustainable energy the investment it needs, we could solve our energy problems rapidly. When are we going to stop making excuses?

This was written by Iron Knee. Posted on Friday, April 18, 2014, at 12:38 am. Filed under Irony. Tagged Energy. Bookmark the permalink. Follow comments here with the RSS feed. Both comments and trackbacks are currently closed.